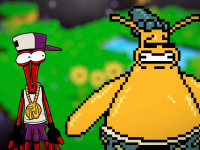 One more trailer for ToeJam & Earl: Back In The Groove has released to show off how we have gone from the original ToeJam & Earl to the latest version

Here we go with yet another small taste of ToeJam & Earl: Back In The Groove as we have a new video short to take in for the game and keep our eyes still looking at the game as we wait for March 1st to roll up on us. It is not too much in terms of the latest version of the franchise that HumaNature Studios is still working on, but it is just a bit more to keep us going. Also a bit more to make sure we all know where the original ToeJam & Earl is coming from, in case you forgot, and how this will be a high definition version of the franchise. In case you forgot that part too. Most likely not, but hey, it is what it is for now.

There is not too much more to say really outside of this trailer does give us more of the voice work going in for ToeJam & Earl: Back In The Groove than we have had before. All in the nice guise of some kind of workout schedule that the duo has been up to so they know they are fit for the modern age while still being a game from 1991. All of which is an interesting take on things and I am curious to see if this will lay the way for another full ToeJam & Earl game to be made where things can be shaken up just a bit more. Time will tell I guess.

ToeJam & Earl: Back In The Groove — Puttin’ On The Bits

ToeJam here to show you how to go from a scrawny 16 bit wiener to a beefy HIGH DEFINITION funklord in just 6 weeks!

Are you still interested in a new ToeJam & Earl game or will this one hit you in the nostalgia hard enough to sate your needs? Do you like the fact that we are getting a full high definition version of the game and do you hope there is an option to play in 16-bit mode? Would you want a full 3D version of the game in the future or would it not fit in the franchise as we know it? Let us all know what you are thinking down in the comments and then discuss. For more on ToeJam & Earl: Back In The Groove, be sure to keep checking back in here. We will keep all of the updates coming to you as best that we can.