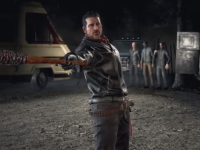 Way back during EVO we caught wind that Tekken 7 was going to be scoring one of the weirder crossover characters in fighting games as Negan from The Walking Dead was going to join the roster. It was right after the huge hype that the TV show had around the characters and it felt like Bandai Namco wanted to capitalize on that. Not a bad call, but it felt off to me. Nonetheless, he is coming to Tekken 7 with the Season Pass 2 of DLC for the game and now we have the first gameplay for the character. All of which in the same way he was introduced on the show as well.

All of this comes fresh from the Tekken World Tour where the gameplay video recreates the scene that caused so many viewers to jump ship from the show. It is one of the more icon ones for the show and in this scene we get to see Negan do the line up with other characters from the video game. All of which leads into the actual combat scenes. I am sure this is all for promotional and not actually how the character will be introduced before the fights. That would totally pad the match times for Tekken 7 if it were the case. Have a look below and see just what I am talking about here and then get ready for the character to come at some point.

Negan gameplay has been revealed for Tekken 7 at the Tekken World Tour 2018. Take a look a The Walking Dead character in action as he recreates the tragic Glenn scene in this trailer. Now that you have seen the weird character for Tekken 7 here, now we get to have a look at the rest of the Season Pass 2 characters coming at some point. Two of which should be playable as you are reading this posting. That would be Marduk and Armor King in the list. We also have the reveal of Julia to the roster of Tekken 7 too. Now you know all of whom are coming to the game and can decide if you want to keep throwing your cash at Bandai Namco to keep them all coming. I am going to guess so for those truly hardcore fans out there who always want to have an expanded roster.

Masked in mystery, Armor King rises to the ring with fearless confidence.

Armor King will return to continue his long-standing feud with Marduk in Tekken 7 Season Pass 2.

"I WILL CRUSH YOU!" Feel the explosive energy of Craig Marduk's violent power with your own hands when he gets added to the Season Pass 2 roster.

What are you thinking about Negan in Tekken 7 here or do you still find it a weird inclusion for the game? Do you think that we will have these scenes in the game or will it all be for the promotional side of things as we have here? Were you hoping for a different character to be announced there for the final slot in the DLC? Let us all know down in the comments and then feel free to discuss. Where there is more to share for Tekken, we will have it all here. Just be sure to keep checking back in for all of that in due time.