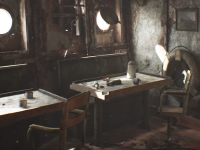 There is no doubt that Man Of Medan has already looked like a dark and horrific experience we will all be having. All in the best of ways, but it is shaping up to be one of the dark horror film-like video games I have seen to date on the PS4, Xbox One, and PC. Given the work we have seen from Supermassive Games in the past, it is not a huge surprise there. That is why it is always nice to see behind the curtain of how they make their games and have a new behind-the-scenes video for Man Of Medan to build us up and get excited for this new anthology called The Dark Pictures. As long as this story goes well and the team is allowed to keep it all going for as long as they want.

What we have here today is a new video that goes into some of the work and prep that the team went through to build the environment we will be in within the Man Of Medan story. We will be wandering a Ghost Ship from WWII that has been left on its own since that era. Something we can have real-world inspiration and information from. This is, of course, what the team did and you can see and hear it all here. They took in ow the rust would form, the way to light areas that are not normally lit, and how sound would resonate in the specific locations by capturing in a decommissioned ship to do so. Man Of Medan already looked terrifying and adding in that realism will certainly freak more of you out.

The Dark Pictures – Man Of Medan — Designing The Ghost Ship

In the first Dev-diary, the Supermassive Games team talk about everything from the authentic audio of the door latches, the way sound reverberates inside the ship to the concept and influences behind the creation of the ship. Every detail was designed in order to give players the most terrifying and atmospheric experience possible.

The Dark Pictures Anthology is a series of stand-alone, cinematic horror games, designed to deliver a new and terrifying experience at regular intervals. Each game is unconnected and will feature a brand-new story, setting and a new cast of characters. In Man Of Medan, four young Americans set sail on a diving trip, to find a rumored WWII wreck. As the day unfolds, and a storm rolls in, their trip soon changes into something much more sinister.

Do you enjoy when games like Man Of Medan dig into realism to immerse you in or is it just extra time that could be spent elsewhere for you? How close to the real thing does this ghost ship look and sound based on what we have so far? Do you think this will persist in the rest of their titles or will it be on a case-by-case basis given the location they choose? Let us all know down in the comments and then discuss. When we have more to share for Man Of Medan, we will share it here. Be sure to stick close by so you do not miss out on any of it.