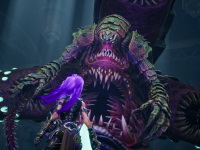 November 27th will mark the day that Fury rides on with Darksiders III, but that does not mean we all have to wait to be able to check out more of the game as well as a look at the Seven Sins. That is at least if you want to throw away quite a bit of the parts of the game that should be considered spoilers. I am going to guess that Gunfire Games and THQ Nordic just want us all to see more and ignore that side of things, but do take notice of that before you press on. At least if that is something you are concerned of for Darksiders III before spinning it up on your PS4, Xbox One, and/or PC. It is all still quite exciting to see…

What we do have here is a bit of Darksiders III running on a powerful PC and pumping out in some of its best forms for us. We also get to see Lust, Gluttony, Avarice, and Wrath in more of a way than we have before. At least in terms of their boss fight and a little bit of the story leading up to and then after each. Thankfully, even though things can be a bit spoiler-filled, the gameplay looks to be varied enough to make each fight a bit different when you actually dive into Darksiders III. Have a look at the rundown and then hope not to be spoiled on the other two we are still missing.

Now that you have seen those fights in Darksiders III, you can choose to take a look at even more gameplay from the game. The first hour or so of the game to be exact. This is where it also get more spoiler-filled as it is directly the opening to what Gunfire Games has built here. It also shows off the boss fight for Envy so there is that to keep in mind before diving in too. If you have come this far, though, I have a feeling you do not care about all of those spoilers and just want to see Darksiders III unfold in this way. Again, you be the judge and see if you really want to see it all.

Have you been fully spoiled for Darksiders III or did you skip it all to see what waits for you here soon? What do you think about the Sins that we have here and what other hidden secrets do you think will be hidden along the core story? Will the Seven Sins be the true fight here or is there something else lurking we will not know until we play the game fully? Let us know down in the comments and then feel free to discuss. If there is more to see and hear for Darksiders III, we will have it here. Just be sure to keep checking back in to see and hear all of it.