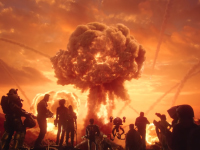 By now you have had your taste of Fallout 76 and/or are looking for more. You may have also missed out on that whole B.E.T.A. thing too for whatever reason as well, but there is more from Bethesda for the game as we wait just a bit longer for November 14th to finally roll on in. Not too much longer and we can play a final-ish version of Fallout 76 on the PC, Xbox One, and PS4 and to help us hold over until that time…we have a new live action trailer for the game… Yes, a live-action trailer to get us hyped up for a video game instead of actual gameplay footage.

Obviously you can have a look at this new video for Fallout 76 down below, but it does not hold all too much for us outside of trying to remind us that it is still coming. For those out there who have forgotten that fact or lost track due to so many other huge titles launching around the same time. These things never make much sense to me but I guess if they are going to throw extra money at marketing instead of actually at game's development we might as well as take it all in. As long as it is not one huge metaphor for what is going to happen when we unbox Fallout 76 on that fateful day…

Reclamation Day, 2102. Twenty-five years after the bombs fall, you and your fellow Vault Dwellers—chosen from the nation’s best and brightest — emerge into post-nuclear America. Play solo or join together as you explore, quest, build, and triumph against the wasteland’s greatest threats.

Do you feel more enlightened for Fallout 76 now that you have taken in a live action video for the video game? Do you question the logistics of doing things like this or would it make more sense to just show off the gameplay instead? Was this the video that made you want to fight the lines to get your copy first? Let us all know down in the comments and then feel free to discuss. If there is more for Fallout 76, we will have it up here on the site. I hope it is more of the actual game and not these kinds of videos…