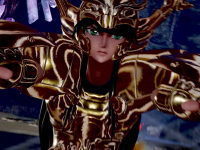 Two more characters are coming to Jump Force now as we have another new trailer and announcement to show them all off. This time they come from an iconic manga series instead of a massive general franchise, but Bandai Namco has already given us so much for that side of the coin so it is time to go a different direction. I have personally never heard of the characters before now, but just know that Jump Force will be getting Seiya and Shiryu from the Saint Seiya IP. I wish I knew more about them to be able to explain what they are doing in the trailer here, but those hardcore fans most likely skipped right along to the footage instead of waiting.

In addition to the new characters for Jump Force, we also have a look at another location in the game. A Mayan City stage at that. All for another location for all of these fighters and characters to mix it up and destroy while trying to save the world. Seems a bit backward, but that is how the genres and such go. I am sure that magically everything will be restored by the end of Jump Force. That or there will be some other kind of explanation besides "video games" and such. I may have too much faith in all of that. Nonetheless, you can see it all below in the latest trailer for the game to get us all revved up.

Bandai Namco Entertainment Europe has revealed the addition of Saint Seiya characters — Pegasus Seiya and Dragon Shiryu — to the cast of Jump Force.

Appearing in iconic manga series Saint Seiya, Seiya and Shiryu are members of the Knights of the Zodiac, a group of handpicked warriors that have pledged to protect justice and peace across the world.

Pegasus Seiya is the Saint of the Pegasus constellation — famous for his unbending resolve and unbreakable mind. When in dire need, Seiya can call upon the power of the Gold Cloth of Sagittarius, increasing his strength to its ultimate limit.

The second playable character from Saint Seiya is Dragon Shiryu. Protected by the Dragon constellation, he is one of the calmest and most composed of all Saints. He is also one of the few Bronze Saints deemed worthy enough to wear the Gold Cloth. When needed, he can summon great strength from the Libra Cloth using its many weapons to defeat his foes.

Also revealed today is the Mayan City stage, where Jump Force fighters will do battle across ancient ruins of the Central American civilization.

Were these the next characters you were expecting to join Jump Force or did you hope for something else? Do you think that we will have a solid story explaining everything in the game or will it be general "video games" to make it all happen? Who else are you hoping to see make the cut for the roster here? Let us all know what you are thinking down in the comments and then feel free to discuss. For more information for Jump Force, keep coming back here. We will keep updating you all as best that we can.