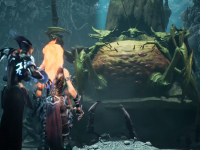 We have even more gameplay for Darksiders III here to share this week and it may seem a bit familiar. We get to see that good old fight between Fury and Sloth again, but this time without the skipping and obfuscation that Gunfire Games put on the first time. You know, the stuff that keeps story spoilers away from Darksiders fans who want to experience the game completely the first time. Take that as your first "spoiler alert" here as this does show off a bit of the game's story and other bits that THQ Nordic should have held back on. At least for those who are navigating the spoiler mines of the internet.

All of that said, this new gameplay does show off a few other ways that Fury and Sloth can fight in Darksiders III and just how it will end. Before we did not get to see the Flame Hollow in action and it looks to be overly useful in this fight here. Fire and bugs usually do not mix and that is the case here too. At least for the Sloth bugs of Darksiders III. This version of the fight does go down a lot faster than I have seen in the past given the Flame Hallow. I also may be misremembering all of this from before as well. Have a look for yourself if you do not care about being spoiled though. Maybe you will take away something different than I did.

Watch as we fumble our way through the Sloth boss fight in Darksiders III.

Did you see Sloth go down a lot faster in this version of the fight or will it be something longer in the final version of Darksiders III? How do you think the other Hallows will work on this boss or will we only ever get to use the Flame one here? Did you skip it due to not wanting to be spoiled while wondering why this bit was even allowed to be released as of yet? Let us all know down in the comments and then discuss. As more for Darksiders III filters out there, we will have it up on the site. Just be sure to keep coming back for all of it and you should be ready for November 27th when the game hits the PS4, Xbox One, and PC.