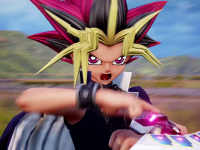 The roster keeps growing for Jump Force as we add another character and franchise to the list with a few other things in tow. Yugi Muto from the fame of YuGiOh has been placed into the game now by Spike Chunsoft and Bandai Namco and will do more than just summon things to fight for him. Well, that may not be completely true as that is all we get to see here. Nonetheless, we have the IP added into Jump Force and will get to see how he will use the Dark Magician, Dark Magician Girl, and the all-mighty Slifer the Sky Dragon to save Earth from whatever is causing the issues there. That part is still not clear, but we have until February 2019 to nail it all down.

In addition to the new character(s) we have here for Jump Force, we also have a look at the new arena with a Golden Gate Bridge stage. It has obviously been altered due to what is going on, but still holds all the same look and feel to make sure you know you are in a version of San Francisco somehow. We really should not try to put too much logic into all and just focus on the fun side of what Jump Force may be bringing us. You can see it all in action just below with the latest trailer for the game that highlights all of this. Have a look and do enjoy.

It's time to welcome the King of Games as he steps into the fight in Jump Force! Unite with Yugi to summon the Dark Magician and Dark Magician Girl! Or unleash the full force of the mighty Slifer The Sky Dragon on your opponents!

Did you ever expect to see Yugi join in the fun for Jump Force here or was it a bit of a shock? Do you think he will bring more to the game than just having others fight for him or will that be some of the special actions he can take in the match? Who are you still waiting to see join in the mix of the roster or are you good with what is there already? Let us all know down in the comments and then feel free to discuss. For more on Jump Force, be sure to keep coming back here. We will keep updating you as best that we can. Do not get let down…