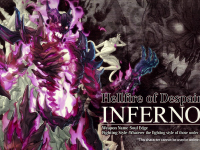 The next, and most likely last, character for SoulCalibur VI is here to take in and it is another from the franchise history to torment us all. Inferno is back in and updated by Bandai Namco for the game just in time for its October 19th release date. It was something that had been rumored already for SoulCalibur VI and now we have confirmation and the ability to see the character in action. Also with a little bit of what looks like a story scene mixed in. It could be something how it is going to be shown off in the game. At least that is the hope on my side of things.

It is worth noting here that Inferno will not be able to be used when playing SoulCalibur VI online in multiplayer mode, but should be usable when sitting on your couch. This seems like a weird thing to do as it is a character that should be available to all once they play the game, but still not usable for online play. Maybe Inferno is an unbalanced character in some way? That would seem like a poor choice for SoulCalibur VI as well, but it is what it is here. Maybe we will get a full answer here in the coming days before the launch and we are able to see what is going on with the character.

Inferno, the original antagonist that kicked-off decades of struggle for power in both Soul Blade and SoulCalibur returns to SoulCalibur VI to wreak havoc and deal death to all challengers. As the evil spirit of Soul Edge, Inferno is fearsome, possessing deep knowledge of fighting techniques which he mimics with uncanny skill, allowing him to use any weapon and fighting style with a phenomenal degree of expertise. Inferno’s power defies standard means of measurement, if one were only comparing skill and weaponry, then Inferno easily transcends any of Soul Edge’s previous vessels.

Did you fully expect to see Inferno show up for SoulCalibur VI or did you think he would just be a boss that was unplayable all the time? Why do you think this is the only character so far that we cannot take online with us? Do you think it could be a weird balance issue or will there be a better reason as we get closer to launch? Let us all know down in the comments what you are thinking and then feel free to discuss. For more on SoulCalibur VI, just keep checking in here as we will keep it all coming to you. At least if there is more to share before launch.