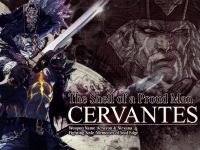 Fans of Cervantes from all of the past titles can rest assured that the character will be back for SoulCalibur VI now. I say this because we finally have the reveal trailer for the character here from Bandai Namco to show how the character has evolved and changed since we last saw. Especially since he was taken down and sent to Hell in previous SoulCalibur titles. At least as we are going here with the current lore and how the character is being brought back to join in the fight on October 19th when the game hits the PS4, Xbox One, and PC. You know, because we need a whole lot of backstory as to why all of these fighters will be button mashing along the way…

In any instance, Cervantes will be here for SoulCalibur VI and has taken on more of an undead pirate look than he has before. He will also be back swinging both the Acheron and Nirvana blades to cut everyone down in the fight. It also looks like he will be using some firearms among other maneuvers in SoulCalibur VI to try to walk away with the Soul Edge again. At least I think that is his motivation here. Maybe it will be a lot different this time around and we will be able to understand more than just a free-for-all fight that is going on.

When Cervantes first gripped Soul Edge, the power of the cursed sword transformed him into a monster. He used the sword to bring a reign of terror and carnage to the world, as the sword continued to manipulate his mind. But soon the cursed sword’s plans were thwarted by a heroic ninja and a brave warrior. Cervantes was defeated, consumed by fire and sentenced to the depths of hell, his body turned to ash.

Later the now new owner of the Soul Edge, Nightmare comes across Cervantes’s remains, but left without noticing the small glimmer of light emitting from his body. The Soul Edge had once again set the terrible wheels of fate moving and brought Cervantes back from the dead. After his resurrection, Cervantes now walks grinning through a sea of corpses, claiming countless souls and leaving desolation and destruction in his wake. His final aim is clear: to once again to make Soul Edge his own.

Cervantes fights with two weapons, Acheron and Nirvana. His main sword, Acheron, has been his sword since he plundered it from its hapless former owner during his reign of dread across the Atlantic Ocean. His secondary weapon, Nirvana, is a dagger with a pistol in the hilt. While pistols of the time were still relatively primitive, shooting an opponent could break their guard, allowing for a fierce follow-up blow. The gun dagger was a gift from the Italian weapons dealer Vercci and symbolizes the twisted connection between the feared pirate and the Merchant of Death.

Are you glad to see Cervantes back for SoulCalibur VI or did you think he was dead and gone from the franchise? How are you feeling about the new look for the character and do you think it is the right progression to go with? What other characters are you looking for to join the roster or do you think we will have more new fighters in the mix soon? Let us all know down in the comments and then discuss away. As we dig up more for SoulCalibur VI, we will have it up the site for you. Just be sure to keep checking back in to be able to see and hear it all.