Pathfinder: Kingmaker Will Have Us Telling Tales Around The Taverns
by David 'Hades' Becker [ Tuesday, 4th of September 2018 - 05:00 PM ] 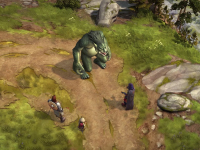 A new look at Pathfinder: Kingmaker shows off some new gameplay as well as how some of the grand Pathfinder adventures can be told in the game

We have one more look at Pathfinder: Kingmaker here just weeks before it hits the PC on September 25th. I am not talking about the tabletop version of the adventure path here for those who have been left in the lurch about the video game version, but I am talking about the new game from Owlcat Games that was kickstarted and then picked up by Deep Silver. I hope you have been following along with it all so far as it has been looking like an insanely viable option to playing this adventure in the Pathfinder universe while not needing a set table and time to play it all. That can be the most difficult part of it all in the modern nights now.

Anyways, here we go with a new look at a few of the stories from Pathfinder: Kingmaker, as well as some small amount of gameplay, to look at and see how the team is going about telling it. At least that is how it all seems if this is not just a promotional video telling some of the core adventures we will be playing in real-time instead of recanting the adventures around a tavern table. I mean, that would be cool in a few instances in Pathfinder: Kingmaker, but I am hoping it will all flow a bit more organic than that during the gameplay. I will take it either way, but I have my preferences and hope it goes that way instead of a general one.

On the closing day of PAX West, Owlcat Games and Deep Silver would like to say thank you to all the fans and take this opportunity to share the latest trailer “Tavern Party” for Pathfinder: Kingmaker the critically acclaimed and highly anticipated cRPG!

Join our intrepid adventurers as they kick-back a little and discuss their next exciting risk-filled quest!

For those wondering, as someone who is currently playing in a Pathfinder: Kingmaker as a tabletop, it is sounding more and more like Owlcat Games is sticking to the source material as best that they can. I have had a few of these adventure in my game already and will need to keep my video game play of this on the slower track if I do not want to spoil the tabletop version. At least for the big things as the smaller tidbits and story can be altered in Pathfinder as our DM chooses to do. I just see the story I have already played here and am excited to see how it progresses here in video game form.

Are you ready to give Pathfinder: Kingmaker a play or will you be in a similar situation I am in where you do not want to spoil things one way or another? Do you think this is how the general story of the game will be presented or is this just for the marketing reasons for now? How many changes from the tabletop to video game do you think we are going to see when all is said and done? Let us all know what you are thinking down in the comments and then feel free to discuss. For more on Pathfinder: Kingmaker, keep coming back here as we will keep the news and updates coming for it.