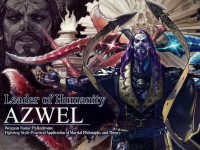 One more fighter has joined the ranks of SoulCalibur VI and it is Azwel. If you are not familiar with this character, do not fret. This is a completely new character for the franchise that Bandai Namco has put together for us to expand not only the roster here, but also that of the SoulCalibur franchise. Finally another new one that is not just a crossover character or a twist on an original character of some sorts. I will take it and now have more to look forward to on October 19th when the game drops on the PS4, Xbox One, and PC. If only we get more like this.

As you will see here, Azwel is a new and flamboyant character who is a self-proclaimed leader of humanity in SoulCalibur VI. He also has the ability to manifest weapons out of nothing due to the true weapon he wields, Palindrome. It is and interesting take on things here and it has that FFXV feel to it all. Not that this is a crossover to SoulCalibur VI, but that is how the weapons here feel to manifest for Azwel. Have a look, see what I am talking about, and then be happy that we have another true new character to the roster here. That is the better part of it all.

“You shall be sacrificed for the human race!” Azwel, Leader of Humanity, wields the powerful weapon Palindrome which grants him the ability to manifest weapons out of thin air!

What do you think about Azwel here for SoulCalibur VI? Do you like the look and feel of the character or does it look like the one you will leave unplayed as much as possible? Do you think we will start to see more of the new characters in the mix now or will this be the last one to grace the roster? Let us know what you are thinking about all of this down in the comments and then discuss. When we find more for SoulCalibur VI, we will add it to the site here. Keep coming back to see and hear all of it so you are completely ready for the game.