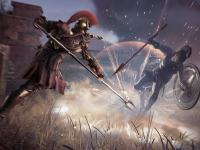 I hope that you are ready for a whole lot of new gameplay for Assassin’s Creed Odyssey as that is what we have gathered up here fresh from Gamescom. The event may be done and gone, but that does not mean that Ubisoft did not have a whole lot to show off out at the event in terms of the two protagonists and the gameplay demo that was out there for fans and media. In fact, the demo also showed off more of the end game content we will have to contend with when it comes to truly completing Assassin’s Creed Odyssey before all of the DLC starts to drop and fills our time until 2020 when the next one will most likely be dropping. Maybe we will have moved on from the PS4 and Xbox One by then and see where the franchise is going from their so we can all experience the same as we would on the PC.

Anyways, first up we have a new cinematic look at Alexios and Kassandra from the game. Both of whom have Spartan blood running in their veins and have been tasked with saving Greece from what is going on in the ultimate story of Assassin’s Creed Odyssey. They are more or less the same footage just with the different character behind the camera. It does show us that no matter which one we go with the game will probably play out the same just with a few bits of dialog changed and different voice work behind it. At least that is how I am seeing based on all of this. Have a look and see if you can see something truly different here.

Watch the Assassin’s Creed Odyssey Gamescom 2018 Alexios Cinematic Trailer! Embark on an epic adventure where you must define your path in a world on the brink of tearing itself apart.

Watch the Assassin’s Creed Odyssey Gamescom 2018 Kassandra Cinematic Trailer! Embark on an epic adventure where you must define your path in a world on the brink of tearing itself apart.

Another things that made a huge splash out at Gamescom for Assassin’s Creed Odyssey was the fact that Ubisoft showed off that we will be hunting down and killing Medusa in the game. They even have their own reason why she is still alive and there are other heroes out there who have claimed to kill her. It also builds into how we will face off some other monsters from Ancient Greece as it turns out that they are just humans that have been corrupted or altered by the first civilization tech that is out there and they have now become the guardians of the location. An interesting take on how these things could exist in the world without being an Animus glitch of sorts. Although I would love to see that come back so we can take on the Greek Gods as we did the Egyptian ones.

See high-level combat abilities in action as we explore new areas of Ancient Greece in the hunt for the sinister, snake-haired Medusa in the Gamescom demo of Assassin’s Creed Odyssey. Watch for tips on how to track her down and avoid being turned to stone when the game launches on October 5.

Assassin’s Creed Odyssey — How Greek Myths Tie Into The Lore

Get a taste of Level 50 end game with a walkthrough from the game director.

Separate from our visit to Ubisoft Quebec for our month of exclusive Assassin’s Creed Odyssey coverage, we recently had the chance to fight Medusa in a full mission from the game!

What do you think about the heroes of Assassin’s Creed Odyssey now that we have seen them in this new light? Do you think that the game will truly feel different based on which one you are playing as or will it still boil down to the same experience in the long run? How do you feel about the way they are handling the monsters of myth here in the end-game content and does it fit better than having them be glitches in the system? Let us all know down in the comments and then feel free to discuss. We will keep our eyes open for more on Assassin’s Creed Odyssey and when we spot something, we will place it up on the site. Be sure to keep checking back in to see and hear all of it in due time.