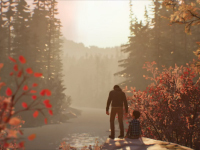 We finally have our first real look at Life Is Strange 2 now and it looks like the game is going in a different direction than some thought from the past. If you had any inclination that it would be just a continuation from the first one that DontNod put out there, then you have not been paying attention and need to rethink your life. There are so many options that they could take Life Is Strange in, as we saw from the demo that Square Enix had them put out around E3, and this is a new one with a whole new cast, location, issues, and story. Look at me prattling on though. Here is a bit more on what to expect when the first episode hits the PS4, Xbox One, and PC on September 27th.

In Life Is Strange 2 we will be taking on the role of two brothers who are in a bit of a pickle. Sean and Daniel Diaz are up in Seattle, have something go horribly wrong and are now heading for Mexico to look for safety and some kind of normalcy in their life again. The story we get to play is their travels down there with Sean doing all he can to fill in as a parent for Daniel; all while coming of age himself. I am also going to guess that one of them has the new superpower we have seen teased and should have known was coming from the first Life Is Strange and other media placed out there thus far. My guess is telekinesis, but maybe they will mix things up and give us a true turn and twist in the story.

As I said, here is the first true trailer we have for Life Is Strange 2 showing off a bit of what we all knew and could have expected for the game. DontNod is also aiming to make this one of their more ambitious in the franchise. Given what they just recently did with Vampyr I have a feeling we will see something truly amazing. Or they will get a deal making Life Is Strange into a serialized TV show and move on from making video games. They do have that side of the storytelling down fairly well at this point…

Two brothers Sean and Daniel Diaz, 16 and 9, are forced to run away from home after a tragic incident in Seattle. In fear of the police, Sean & Daniel head to Mexico while attempting to conceal a sudden and mysterious supernatural power.

Life on the road is tough and now totally responsible for his much younger brother, Sean begins to realize that his decisions will impact their lives forever…

Was this about what you were expecting for Life Is Strange 2 or did you envision things a little different? How do you think the brothers will work together or will it be more of the older brother doing things that will affect the mindset of the younger? Do you think that Daniel will have the superpower, will Sean have it, or will it be some combination where they need to work together? Let us know your thoughts and theories down in the comments and then feel free to discuss. For more on Life Is Strange 2, be sure to keep checking back in here. We will keep all of those updates coming at you and you will be glad you stuck around.