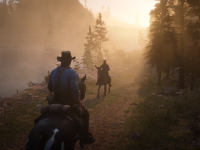 It is finally here and we can see what we have been waiting for with Red Dead Redemption 2 as the first real gameplay video has dropped out there for us all. The slight teases and little bits we have seen from Rockstar Games should have prepared us all for this, but after seeing what it will all hold, you will not be ready. Unless you knew that not only would Red Dead Redemption 2 look leaps and bounds better than any of the studio's titles from the past. That and how much more content they are jamming into the game to make sure we have an insanely rounded experience when it drops on October 26th for the PS4 and Xbox One.

If you have not just skipped on down the page to view the video already, it looks like Red Dead Redemption 2 will be one of the more immersive titles in the studio's history as well. There is a whole lot of talk about how all of our actions matter in the game from interacting with our gang in the downtime to how we treat others on the road. We will have the option to do as we wish as we run from one side of the country to the other, as it all sounds. We could just get into some crazy and cinematic bar fights and shootouts instead and leave the rest of Red Dead Redemption 2 unexplored. It would be a waste, but we could do that. Especially if we do not want to hunt down bear and wolves.

Enough of my finger wagging here. I will let you get to why you came in here in the first place. Have a look at the first gameplay for Red Dead Redemption 2 just below and get ready to wait for more to come. These six minutes of footage is only a slight look at what is to come as we have more of the missions, side events, and mini-games to look forward to in the future. It really does go to show that great things can come when we can all sit and wait for the teams to take their time and do a great job.

Red Dead Redemption 2 is coming October 26, 2018 to PlayStation 4 and Xbox One systems.

Have you recovered from the shock of how good Red Dead Redemption 2 looks here? Di you expect the gameplay and cinematics to flow as well as they do and not seem to lose any fidelity in the process? Will you be losing so many hours to the hunting and foraging in the game or will you try to stick on the solid path that Rockstar Games will present us with? Let us all know down in the comments and then feel free to discuss away. When we have the next footage to show you for Red Dead Redemption 2, we will have it here on the site for you. Just be sure to keep checking back in so you do not miss it.