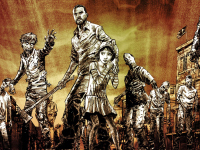 We are yet another day closer to The Walking Dead: The Final Season kicking off and just in case you have missed out on all of the fun from before, Telltale Games is offering up another chance to get in on it all. You could just pre-order and buy the bundle that gives you all of the episodes in the story so far, but that would require one epic binge of the franchise. Not that doing so is not worth it, this version of The Walking Dead has totally been worth it, but some of us do not have the time. At least if we missed out on it before for some reason. That is why I am guessing we now have a new Story Builder video to use from the devs so we can jump into The Final Season right on August 14th and have the Clem we have wanted since the beginning.

The more interesting part of this is that it is not just a recap of The Walking Dead to date, but it is a way to get that recap and upload your choices right now so you can start off from this point and move right along. This is not the only way to carry over all of your choices so far in the games to date. It is just another option that will also be available in The Walking Dead: The Final Season once you spin it up for play. You can just do it now and also get a nifty little poster to show off the type of Clementine you will be playing as. There are apparently 32 different versions you can get so happy hunting and getting exactly what you want before launch. Introducing The Walking Dead: The Final Season Story Builder, an interactive, browser-based experience that allows you to relive the series’ most impactful story-branching moments. Your choices in the Story Builder produce a unique version of Clementine that can later be imported into the game itself. These choices will then be reflected in The Final Season. The Story Builder is available now and can be accessed here.

Upon completing the Story Builder, you will be given the option to sign in to your Telltale Games Account and save your results to the cloud. By logging into this same account when playing The Final Season on PC, Xbox One, PlayStation 4, you will be able to download your Story Builder choices into the game. The Story Builder will also be available within The Final Season and will be localized in multiple languages for launch. Of course, you can still choose to import your existing series save files into the game instead.

A word to the unwise here, the Story builder we have for The Walking Dead: The Final Season here does not give you all of the options we did have at some of these pivotal points and mostly ignores the most recent season of episodes. I would fully recommend playing all of the previous episodes and building from there if you can. It will be the true full experience and well worth the price of admission. That is unless Telltale is going to ignore the third season as much as they seem to here. Still a fun play but as Clem is a smaller role in it, I understand the choice there. We will know for certain here in only a few weeks.

Will you be using this new system to rebuild your previous story for The Walking Dead: The Final Season or will you just carry over everything you have from before? Were you able to get the Clementine that you were looking for or will she be lost the multiple different options forever? Are you curious why there are fewer options for the third season here or does it make sense to you too? Let us know what you are thinking down in the comments and then feel free to discuss. When we have more to share for The Walking Dead, we will share it here. Just stick close to the site to be able to see and hear it all.