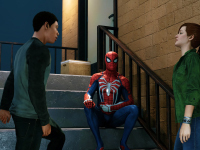 Just as many of us thought, Spider-Man for the PS4 was one of the big games out at SDCC that Marvel was out there showing off. It was not the only one, but that will be our focus on things right now as Insomniac Games’ version of the franchise will be landing here on September 7th and the other games looked at are out already or further out than that. All of that said, it looks like there will be even more characters than we thought in Spider-Man when it launches in all of the heroes, allies, villains, and anti-hero categories. At least if they keep some of how the latest to show up in the story close to here comic book counterpart. I have a feeling they will, but let us take another look.

In the latest Spider-Man trailer for the game, we get a good look at Silver Sable in the game as well as Miles Morales and Mary Jane. Although there is definitely more of a focus on Sable as she has been hired by Norman Osborn to run security and Spidey has been labeled a threat. More or less, it looks like she is doing her job as Spider-Man teams up with Miles and MJ to do things that a spider cannot do on his own. All very interesting given that we know Spidey will not be the only playable character in the cast of heroes and we see a little bit more of it here. Have a look for yourself.

The high stakes in Marvel’s New York escalate, as Mayor Norman Osborn is willing to take no risks during his re-election bid. He hires Silver Sable and her security force, Silver Sable International, to restore order to the city — which includes stopping someone he believes is contributing to the mayhem: Spider-Man.

To go a bit further, and as I suspected, we also had a nice reveal of the third and final Spider-Man Suit we will be getting in the pre-order bundle. As you will see below, it is the Velocity Suit and it was designed by Adi Granov for the game. It is just another of the many that Insomniac Games has already placed in the game and I am going to go on a limb and say it will increase Spider-Man’s speed when it is used. It makes the most sense here as each will give some kind of stat boost or special skill the Peter as he puts them all on. Nonetheless, have a look at it in action just below and then secure your pre-order if you have not already done so.

A glimpse at the Velocity Suit designed by acclaimed comic book artist and film character designer, Adi Granov, in action.

What are your thoughts on Silver Sable joining the fight against Spider-Man here and do you think she may change sides at some point? Do you think that we will actually get to play as Miles in the game or will it be only Peter and MJ as we have already heard announced? Was this the suit you were expecting to be the third or will you have to hope your choice comes up in the final game here? Let us all know down in the comments and then feel free to discuss. For more on Spider-Man in any way, shape, or form, be sure to cling to the site here. We will keep digging to find more to share and you will be glad you stuck around.