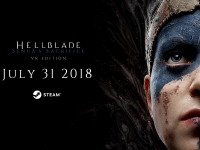 Just when you thought that Hellblade: Senua’s Sacrifice had hit all of the platforms it could handle, we are here to add one more to that list. It looks like Ninja Theory was aiming to get it out there for all platforms and in the best way to us and in doing so they were working on a VR version of the game to take us deeper into the mind and world of Hellblade and Senua. The next best part, it is a free update for all of you out there who picked up the game on Steam and have an Oculus Rift or HTC Vive to play the game in. Sadly, for those out there who are playing on the PS4 and Xbox One, this is a PC only update for the VR and they will only be seeing a bit more of a graphical update at most.

As for moving around in Hellblade: Senua’s Sacrifice, it will still be its free movement system that we have already experienced and the VR version will not be a first-person experience. We will still be floating over Senua’s shoulder for the game but we will be controlling here direction of movement with our head movements. This is to keep her as the focus of the experience as well as combat any form of dizziness players may experience in the game. It sounds like a good choice to go with here and so far looks like it will be a great way to experience Hellblade: Senua’s Sacrifice all over again.

If you would like to see the VR version of Hellblade: Senua’s Sacrifice in action, we have a look at about fourteen minutes of gameplay using the VR mode. It looks to run as smooth as we have seen in the past for the game but this is second hand knowledge and not a direct play of it all. Take that as you will. Then again, it is a free update so you can not truly complain at this point.

What are your thoughts on Hellblade: Senua’s Sacrifice getting a VR mode mixed in now? Do you think it will improve the game or will it be something that is left on the sidelines until Ninja Theory builds a title with VR from launch? How do you feel about the movement controls that we have here and do you think they will handle as well as they look so far? Let us all know down in the comments and then feel free to discuss. If there is more for Hellblade: Senua’s Sacrifice, we will update you here. Just be sure to keep checking in for all of it as it comes.