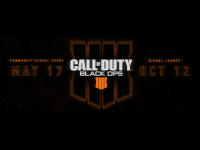 Spyro and Call Of Duty: Black Ops 4 will have a presence during SDCC 2018 with another good look at the next Call Of Duty Zombies as well

With Comic-Con International right around the corner, this week in fact, it would make sense that started to see some of those gaming companies coming out there with their titles and Activision has done just that as we now know that Call Of Duty: Black Ops 4 and the Spyro Reignited Trilogy will be out there in some form of force. It would have felt like a missed opportunity if neither were out there for all those who missed out during E3 and before. Not to mention that this is usually where we have been getting our big Call Of Duty Zombies updates in the past few years. That is why we can sit back and know that we will still be getting those updates and chances to check the games out during this week and weekend.

Unlike past years, it looks like we are sticking to panels and other basic things for Call Of Duty and Spyro here. As I thought, Zombies looks to be the larger focus on the panel that will be happening for CoD here but will also be part of a few autograph events and other bits around San Diego. If you are not able to make it out for the panel or other things on the floor for Thursday, you will also have an opportunity to go meet and greet some of the Call Of Duty: Black Ops 4 devs out in the Gaslamp at the BAIT store, so it is worth noting that down for those who want to see something but were not lucky enough to attend the full event.

I will say that it will be interesting to see the panels transition from Call Of Duty: Black Ops 4 into the Spyro Reignited Trilogy on Thursday as well as they are back-to-back and in the same room during the event. They are vastly different titles out there and given the usual "show up for the panel before the one you want to see" mentality that SDCC fosters, there may be more in the Call Of Duty panel that should not be in there in preps for the Spyro one. Seeing as they both have little extras for sticking around and watching, it could also mean we just have many of those Activision die-hard fans in there who will rush around to the other things to take it all in.

Will you be out there at SDCC this year and will you be taking in the Call Of Duty: Black Ops 4 and/or Spyro panels? Will you be aiming for the off-site event that is taking place or will you be going just for the signings? What new information do you think we will get for Zombies and do you think it will be the cast of characters as we had last year? Let us all know down in the comments and then feel free to discuss. We will be out there coving all things Call Of Duty, Spyro and gaming so be sure to stick around on the site here to see all of those updates and shenanigans we will get up to.