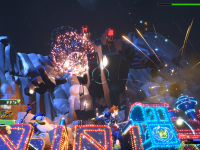 Recently, select media outlets were given a chance to play a bit of Kingdom Hearts III and see where the game has progressed to. It looks like today was the day that Square Enix lifted the lock on the releasing of all of those impressions and feelings on where the game is at so far which means that we have a lot of new B-roll and off-screen gameplay to look at and dissect. I would have thought we would have needed to wait until after E3 for all of this, but it looks like Kingdom Hearts III is getting a head start like a few other titles out there. I will not complain, even though it makes it seem like we may not have much more to experience here in a few week's time. Let us carry right on for now.

As we will see below, at least first, will be a bit of some of the old footage from the Toy Story reveal we had a while ago for Kingdom Hearts III. We also have a nice new look at some of the other aspects of that gameplay and the Wreck-It Ralph summon or special move depending on how you look at it all. Also a bit of the other summons out there. There is also a good look at a boss fight for one of the Titans from Hercules and how we will need to use summons in Kingdom Hearts III at specific times. At least that is how it looks based on this bit of footage we have to take in. Have a look and see if you see something different though.

If you were excited to see a bit of the boss fight from Hercules here for Kingdom Hearts III, it looks like that was the real meat and potatoes of the demo that was shown and we have some off-screen footage of that fight to expand it all out a bit more. There does seem to be a bit of a lull or basic fighting that also takes place in the boss fight, but we get a nice look at the Big Magic Mountain summon that looks to be needed to end this boss. Have a look and enjoy the extended version of all of that and then get ready to wait for the next big update for Kingdom Hearts III soon.

It's Sora, Donald, and Goofy versus Hercules' Titan! Check out some new gameplay of Kingdom Hearts III (captured off-screen) with a special appearance from the Big Magic Mountain summon.

Does all of this excite you more for Kingdom Hearts III or do you still need more context to get you there? Do you think that this will be the only boss in Hercules world or will Hades be making his way back in somehow? How do you feel about the voice acting for the Toy Story characters or do you think that they needed to mix things up more now since they have not been able to get the same voices from the films? Let us and the world know what you are thinking down in the comments and then discuss. As we have more for Kingdom Hearts III, though, we will have it all here for you. Just be sure to keep checking back in on the site to be able to see and experience it all.