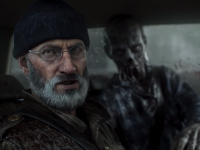 The next character for Overkill’s The Walking Dead is here and we get to know a bit more about Grant before we get to see any actual gameplay. Yes, this is a new cinematic trailer for the game that Overkill has put together and does not seem to house any real gameplay. It may not be what you were hoping for just yet for this title in The Walking Dead universe, I know, but it is still something that Starbreeze wanted to have out there as we wait for that fateful date in Fall of this year so we can play the game on the PS4, Xbox One, and PC. It is also par for the course on what they are pumping out there for us so it is not too strange to have only this. I am sure we will get something more solid for the game at E3.

That all said, here we go with the third character named Grant who is out there in the ruins of Washington and doing what the rest are doing in Overkill’s The Walking Dead. That would be surviving and trying to find a reason to press on in this terrible setting. In the case of Grant it look and sounds like he is out there trying to find his granddaughter whom he hopes has been surviving so far. It is The Walking Dead, so it is easy to assume that she is either dead already or will be by the time Grant can catch up. I would be questioning more on where her parents are in the mix of it all personally, but it looks like he is only set on finding his granddaughter and nothing else.

Check out a third playable character, Grant, in this Overkill’s The Walking Dead video game.

Grant does look to be the more "grizzled" character we have seen so far for Overkill’s The Walking Dead and the characters are starting to fall more into roles as we saw in Left 4 Dead. That could just be me imprinting on to what we have seen and games we have played already all mixed with the lack of what the game is going to truly be about. At least in terms of gameplay. That does not lower any levels of excitement for Overkill’s The Walking Dead, but it is starting to line up in ways that I have already played and experienced. I truly hope that Overkill gives us something new and the character similarities are nothing more than that.

What do you think about Grant here for Overkill’s The Walking Dead? Do you agree that the character shares a lot of similarities to other characters in similar games or is that all in my head for now? Do you think this is the most fitting story for the universe we are in here or is it the same one played out over and over already? Let us all know down in the comments and then feel free to discuss. For more on this game and many others in The Walking Dead universe, be sure to stick close to the site as we will keep all of the updates coming as best we can.