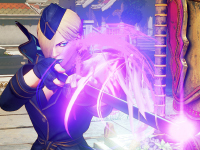 The next character DLC for Street Fighter V: Arcade Edition is here to look at as Falke is coming to be a playable character after showing up in the core game originally. Maybe you remember her from Ed's story or maybe you do not. Either way, Capcom has added her to the Season 3 Character Pass for Street Fighter V and we will soon be able to enjoy yet another character in the mix. You can also unlock her to be playable for $5.99 USD or 100,000 Fight Money if you did not want to shell out for the Character Pass thing. Just as we have with all of the other new characters that have been brought to us over the course of the game's life cycle.

Falke will be bringing her staff fighting to Street Fighter V: Arcade Edition here as well as all of the little extras it can bring to the fighting side of it all. She will be able to charge up here "Psycho Power" with said staff and unleash blasts with it like a shotgun or other firepower we have seen in the game so far. Her V-Skill, V-Triggers, and Critical Art is obviously all tied to this staff. Each of which having various uses depending on the basic controller inputs that will be needed to get it all to fire off. Think how Ed's stuff already works in Street Fighter V and you can expect Falke to have the same ease of use here. Just punch and kick inputs from the sounds of it.

Here is the trailer showing off Falke in Street Fighter V: Arcade Edition and all of the finer details for the moves and everything if you need to know before she officially joins the roster. Or your personal one depending on who you opt to go about unlocking her.

Falke was built to be an alternative clone for M. Bison. She was heavily experimented on by Shadaloo and was forced to train day in, day out to achieve perfection. Falke has the unique ability to infuse Psycho Power into objects and release it through them, mainly through her staff, which she named Harmony. Years of harsh training went by, causing Falke to spiral deep into despair, wishing for it all to end. Finally, Ed came to her rescue and they both were able to escape Shadaloo. Now, the two have a sibling-like bond and are searching for others like them in need of help.

Falke utilizes her staff in battle to keep opponents at range, but it also serves as her conduit for Psycho Power. By holding down any punch button, Falke can charge up and store Psycho Power until the button is released in one of three different ways:

Like Ed, some of Falke’s special moves only require either two punch or two kick buttons – no special inputs required. Pressing two punches will result in Psycho Schneide, which is her version of an uppercut. Pressing two kicks is Katapult, which sees Falke pole vaulting towards the opponent in a kick motion.

Falke extends one arm and spins her staff in front of her. Psycho Trombe on its own can be canceled into by a variety of normal moves and can also be used to absorb projectiles.

In this two-block V-Trigger, Falke powers up her ability to infuse and release Psycho Power from her staff and will allow her to use additional versions of her special moves without needing to charge up in advance.

Pressing HP+HK again during this V-Trigger will cause Falke to use Psycho Shrot, a powered up version of Psycho Kugel that emits three bullets and travels further. Pressing down and HP+HK will see Falke using Psycho Panzer, a powered up version of Psycho Kanonen that deals more damage. Finally, pressing HP+HK in the air will cause Falke to use Psycho Jaeger, a stronger Psycho Feder that can ricochet off the ground. Psycho Shrot and Kanonen can be canceled into each other and can leave the opponent prone to a Critical Art.

In this three-block V-Trigger, Falke increases her ability to utilize her staff in various ways. Upon activation, Falke will immediately twirl around hitting the opponent into the air, which she then follows up with a surge of Psycho Power.

Pressing HP+HK during this V-Trigger will result in Falke using Psycho Sturm, a sweeping hit with her staff that can be canceled into to extend combos. Pressing down and HP+HK will see Falke using Psycho Klinge, where she jumps diagonally into the air before slamming her staff down on the opponent and can be followed up with normal moves. Falke’s V-Skill, Psycho Trombe, can also reflect projectiles during Psycho Angriff.

Finally, each of the new moves Falke gains during Psycho Angriff can be canceled into from special moves like Psycho Schneide and Katapult, increasing her combo potential and damage.

With a Psycho Power-charged staff, Falke launches opponents into the air. She then pole vault up to meet her opponent, whacks them sideways with her staff, then slams them down with a final overhead swing.

What do you think about Falke here for Street Fighter V: Arcade Edition? Do you like the addition of the character here or would you have rather had a different one in the mix? Do you think we will see a Season 4 of the Character Pass or will Capcom give us a full new title sometime soon? Let us all know what you are thinking down in the comments and then feel free to discuss. For more on Street Fighter V: Arcade Edition as it comes, be sure to stick around here. We will keep all of the updates coming as best we can.