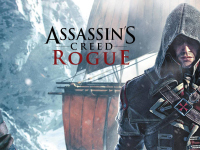 Sometimes games go missing through the cracks or just have poor timing when they release. These were a few of the reasons I heard and experienced on why gamers missed out on Assassin’s Creed Rogue way back when it launched. It was competing with another game that Ubisoft had also put out but during the age when we were all transitioning to the PS4 or Xbox One. That is one of the great reasons we have remasters and why I was excited to find out that Assassin’s Creed Rogue Remastered was going to be an actual thing out there. Now that it has released, I have had a chance to give this missed addition to the franchise a shot and see just how it was upgraded from the earlier version of itself. Here is our review.

The Animus year is set in the mid-1800s and we are out there reliving the adventures of Shay Cormac. He is yet another member of the Colonial Assassins group who are out there to make sure we all keep our free will and such. That is until Shay finds out that the Assassins may not be all high and mighty as they have always led him to believe. His convictions are tested, as well as his physical fortitude, and now has turned his back on those he once called a Brotherhood. Will he be able to stop the Assassins from setting off what could end many lives or will he be a puppet yet again? Find out as Abstergo Entertainment brings the fun to you… If there was one thing I was hoping for in Assassin’s Creed Rogue Remastered, it was to get some of the clunky gameplay mechanics and controls ironed out a bit more to lead to a smoother gameplay experience. This was sadly not the case as the controls stayed the same, but all of the weird bugs and glitches of the parkour still remained. Of course, Ubisoft has further perfected it in their more recent game, but here it was almost carried over without any upgrade or tweaking done. Too many times I leapt to my death as the inputs made Shay take a hard right instead of a graceful left. I could be jaded from the better version of it all in Assassin’s Creed Origins currently, but it still made for a difficult play experience when all was said and done.

Another weird issue that could have been remedied in Assassin’s Creed Rogue Remastered would be the camera angles and everything that goes along with that. Not even the camera angles directly either, but camera effects too. These glitches seemed to make it right over into the remastered version of the game when motion trailers persisted when they were not needed, or the screen frost never melting away when out of the ice. I had many sequences where I had to play using Eagle Vision to be able to see anything or just plain restart the mission. I cannot be certain these issues were in Assassin’s Creed Rogue back in 2014, but in a 2018 version of the game it seems out of place and a bit on the breaking side of things. Just a little extra work could have solved all of this but it looks like that work went into making the textures look nice.

Lastly, and this is something I know was in the original version but breaks the game a bit still, the new types of enemies in Assassin’s Creed Rogue did not add much to the experience and just made things more frustrating. Specifically, I am talking about the Stalkers here. Even with a nice and well-planned tutorial on how to deal with them, when it came to practice I was always left dying and needing to restart. I get that Shay would need to be on guard all the time in this new life he is in, but there needed to be some kind of balance to it all. Never did I think they were a great addition to the game, outside of the tutorial, and was left turning Assassin’s Creed Rogue Remastered off to break and refocus from the frustration. First and foremost, Assassin’s Creed Rogue played and held up well to one of my favorite in the franchise. That being Black Flag. Given that it was a sequel to Black Flag it makes sense, but Ubisoft took all of the best parts of that game and brought them right in. Almost to a point where I started to blend my own memories of things and could not tell the two apart. The areas in the world, the naval/sailing portions, even the dialog fit right in. It had to be one of the bigger reasons I was excited for Assassin’s Creed Rogue back when it was first announced and then again when the remaster was on the way. This should have been the original game that came to the PS4 back in 2014 in my opinion and not Unity. It carries things over that well.

I guess if it had though, we would not have Assassin’s Creed Rogue Remastered where all of the textures and models were upgraded to the height of the current console generation though. This is another aspect where this truly shined as it felt like a current-gen title and not a remaster in many instances. It even came close to my eye in terms of the most recent title in the franchise. The team did a spectacular job making Assassin’s Creed Rogue Remastered look as amazing as it does. If anything, this would be a great reason to dive right in and give the game another shot or just a first shot. If memory serves, the visuals were one of the things that gamers and critics hammered on for the game. All of that is fixed and ready for us to enjoy here.

Finally, and it is something that I know carried over from the original version of Rogue, the town building and income aspect of the franchise was back. This was something I loved in the second Assassin’s Creed title and always wanted to see keep coming back. It missed a few titles, but it fit right into Rogue. Not only in story but also in interesting gameplay mechanics. Sure, it could be a way to "game" the system for in-game currency, but it was work you had to put in to do that. I was overjoyed to see it here and glad that it too came with its own minor improvements from the original build. It may sound silly to some out there, but having a break from the endless killing and Assassin hunting was fun. I just hope it comes back to the franchise in general now. If you missed out on Assassin’s Creed Rogue when it first launched then I would say this is the version you will want to play anyways. It has all of the nice visual updates and builds on the game that many still hold in high regard. It also gives you a bit of insight into the other side of the fight, which has yet to be done outside of this game. That said, for those who love all of the upgrades to gameplay that have come to the Assassin’s Creed since 2014, it may be a bit rough to get back in. Many of the issues that have been ironed out over the years are still there. They take a bit of getting used to and do not break the game too much, but it is a learning curve some of you out there may not have the time for. Take it as you will for now.

Assassin’s Creed Rogue Remastered was developed and published by Ubisoft for the PS4 and Xbox One on March 20th, 2018. A PS4 copy of the game was provided by the publisher for reviewing purposes.