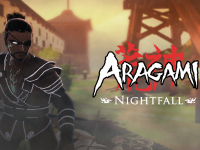 A new expansion for Aragami, an action stealth game from 2016, has been announced and we get to see more of the world’s story with Aragami: Nightfall

If you think back to October of 2016, you may remember a fun new title named Aragami that came out that mixed together a few really great game mechanics and made for an overall fun game. Lince Works did not hide the fact that the game took elements from Tenchu, Metal Gear Solid, and Mark Of The Ninja to craft a game that blended all of those together in a fun way. It was not widely received, but it still brought some fun to the PS4 and PC. Now it looks like we are going to be getting a bit more of it all as a new expansion has been announced with Aragami: Nightfall. Almost two years later, but the team is still bringing it.

While Aragami: Nightfall is listed as an expansion, there is no word on if you need to have the original title to experience. Seeing as it is telling a story that is a prequel of the main game it would make sense that it would not be needed, but why would you not want to play the full game too? The expansion is bringing new weapons and abilities that we never had in Aragami, of course, and it is also bringing the option to play through in single-player as well as co-op. It is online co-op, but it is still a way to experience all of the stealth-action with a friend and set up some rather cool looking assassinations and takedowns. Things I wish I could have done before.

There is no date on when Aragami: Nightfall will be landing, but it cannot be too far off given how long the team has had to work on it all. It seems like they took the money and time from the first game and put it right back in so this expansion has to have been in the works for a year already. As it is building off what worked before, it would seem it would be all scripting and models more than building the rest of the world. At least that is how it would seem to work in my head. Nonetheless, I am glad to see it is coming at some point and cannot wait to dive back into all of that fun again.

Did you play the original Aragami or is this just a reminder that it is still in your backlog from 2016? Do you think it will require the core game to play or will it be its own thing that is linked through the story and all of the other basics we had from before? Do you like the co-op gameplay here or would you have rather it been couch co-op and not online? Let us have all of those thoughts and comments down below. When we learn more for Aragami: Nightfall here, we will place it up on the site for you. Just keep checking back in to make sure you get to see it all before it launches.