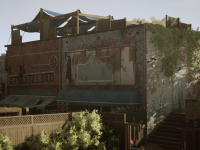 Just a bit more for Overkill’s The Walking Dead title has been placed out there in the mix of the very little we all have had so far. It is still scheduled to release this Fall for the PS4, Xbox One, and PC but Overkill and Starbreeze have not truly given us all much to go on. It is set in The Walking Dead universe, most likely the comics, and also takes place where the core of that story is held. That would be the North American East Coast for those who may not be fully in the loop or just partaking in the West Coast TV adventure and nothing else. There is a large world out there but we all still find ourselves way out there anyway. It is what it is I guess.

Anyways, we have just been given a new developer diary for Overkill’s The Walking Dead and it goes into how the artists for the game are building and then lighting the world we will be exploring. We do have a very little bit of in-game footage to look at, but it still does not show off some direct gameplay. Just how the team is using elements from the franchise to build a better world and also trying to tell a story, or multiple stories, with how everything is set up. More or less, there will be a reason for things to be the way they are in this world of The Walking Dead. No pools of blood there just because it looks cool. There will be a story for it. Maybe just in the artist's head but hopefully for the rest of us out there so we can have a richer gaming experience. We will see…

Have a look at the latest from Overkill for the game here just below. As I said, there is not much in the way of actual gameplay, but you can see how Overkill’s The Walking Dead is being crafted and that is at least something. My guess is that they are saving all of the good stuff for E3 or Comic-Con based on the companies involved. Those are only a few months out from now, so the wait will not be too insane for us all. At least for now.

Overkill’s The Walking Dead is full of different neighbourhoods, and Georgetown is one of them. Take a tour and be guided by our Environment and Lighting artists.

Stay tuned for the next Dev Diary.

Does any of this surprise you for Overkill’s The Walking Dead? Do you think that these "stories" will make it into the core of the game or will they be stuck in the artist's heads left for us to make up our own reasons for a beer can with a bloody handprint on it? Do you think that we will get to travel away from the East Coast in this game or will it be stuck out there like most of the franchise already is? Let us know what you are thinking on all of this and more down in the comments. When we finally get more for Overkill’s The Walking Dead, we will get it all up on the site for you. Just be sure to stick close to the site here so you can see it and be well-informed.