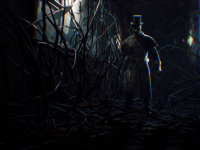 Here we go with another video game trying to get off the ground through Kickstarter, as the campaign for The Beast Inside is underway. Well, it has been underway for a few days now, but I would be remiss if I did not pass the information along to you so you too can help Illusion Ray get the funds needed to finish up the game. I say finish up as it does look like The Beast Inside has had a whole lot of work already done on it and even if the Kickstarter fails, I am sure there will be a release from Movie Games at some point down the line. It would be a shame if so much work went into what we have here just for it to go into the same limbo as all other canceled titles out there.

Anyways, for those just learning about The Beast Inside, it is a narrative-driven horror title from the looks of it that will place us in the role of a C.I.A. cryptanalyst during the Cold War. He needs to crack a new code and needs some seclusion to focus on this and as all horror stories go, he heads to a remote house to do so. A house that seems to be plagued by all kinds of horrors from the American Civil War and out to show off the horrible secrets that another man named Nicolas had to live through. You can hopefully see where this is going and what kind of craziness we can expect in The Beast Inside. That is as long as it gets its funding and makes its 2019 mark that is currently set.

To add to everything for The Beast Inside, it looks like Illusion Ray is aiming to make the game have some photorealistic looking graphics to it all with a fully interactive environment. I have a feeling that the latter there will miss the mark as I know I would just get in my car and drive off once things got too crazy. Maybe that is one of the multiple endings that the team could have if they reach their stretch goals for the campaign. I would rather see The Beast Inside come to the PS4 and Xbox One as well as the PC instead, another of the goals, but that just requires us all to make sure the campaign is a full success and further. Although if they pull it off as I hope, I would also like to see The Beast Inside made into a VR thing as well. I guess I should start throwing money now.

There’s plenty to discover in The Beast Inside, as the narrative follows Adam — a young C.I.A. cryptanalyst, who moves to a house in remote location and intends to work peacefully in seclusion to break a Soviet code, which could be the key to turning the tide of the Cold War. In the house, Adam finds the diary of Nicolas, a mysterious man living more than hundred years ago, in the Civil War era. Uncovering a terrible secret, the past comes alive and haunts Adam and his family. Their lives are at stake, but how are the events from the American Civil War connected to the Cold War reality?

Unique features of The Beast Inside:

What are your thoughts on The Beast Inside as it currently looks and is 50% through its funding goals? Do you think that it will give the right level of fright when all is said and done or will it rely on the jump-scares to do the heavy lifting? Are you curious as to why the multiplatform option is so far ahead of all of the other goals or do you think it is placed where it should be? Let us all know down in the comments and then feel free to discuss. For more on The Beast Inside as it comes, keep yourself tuned into the site here. We will hopefully have a lot more to look forward to as the campaign rages on.