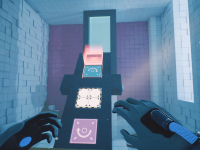 A new trailer for Q.U.B.E. 2 is here and it sheds a bit more light on just what could be going on in Q.U.B.E. 2 in terms of the story

We have just under two weeks until Q.U.B.E. 2 launches, March 13th, and there are still a whole lot of questions that need answering. More on my personal side than anything as Toxic Games has done a decent job so far for the general information, but questions nonetheless. Yes, they would most likely spoil a lot of the fun of Q.U.B.E. 2 if I had the answers before launch but I still have them. All of that aside though, it does look like we have another trailer for the game to help shed a bit more light on things and get us all ready to get back into this adventure-puzzle game for the PS4, Xbox One, and PC.

While it is labeled as a Launch Trailer for Q.U.B.E. 2, it does look to be more of a story trailer than anything as we get to see some new gameplay but also add more to the mystery of the game with the protagonist. Amelia Cross, that is her name, sounds just as confused as many out there have been for the puzzles offered up by the franchise, but she also looks to be on a mission that will expand things further than just a bunch of "test chambers." I use that loosely as it belongs to another IP, but that was how Q.U.B.E. originally felt more than having a fully developed story. Now it sounds like there will be a lot more.

Q.U.B.E. 2 is the sequel to the hit first-person puzzle game, Q.U.B.E. You are Amelia Cross, a stranded archaeologist who has awoken among the ruins of an ancient alien landscape. With the distant help of another survivor, you must manipulate the structure of this mysterious world and find a way back home.

As mentioned, Q.U.B.E. 2 is still slated for release on the PS4, Xbox One, and PC on March 13th. It looks like it will house a lot of the old gameplay but add in a lot of new elements to make it feel fresh but still keep it locked into what fans already know. If you have not played the first one yet, do yourself a favor and give it a go as you have just under two weeks from now to get caught up.

Are you ready for Q.U.B.E. 2 to finally launch or are you still playing catch-up with the previous title? Do you agree that it looks like we will be exploring outside of the "test chambers" or will that all just be part of a cinematic cutscene to confuse us all a bit more? What new mechanics are you hoping to see in the game or do you hope it sticks to what it did well before? Let us and the world know what you are thinking down in the comments and then discuss. As we have more to share for Q.U.B.E. 2, we will place it on the site. Just be sure to keep checking in to keep as up to date as possible.