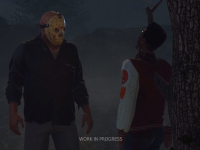 The first tease for Friday The 13th: The Game's single-player challenges is here and it looks like Friday The 13th may be getting some Hitman style gameplay

Those looking for some solid single-player gameplay in Friday The 13th: The Game since launch, it looks like the wait is going to be over soon. This was something that Gun Media had listed on the stretch goals back when they were still looking for funds while IllFonic worked on everything. It was thought that the off-line bots may have been that for Friday The 13th, but now it looks like there is going to be a bit more than that. It will not be a full-on campaign of sorts, but it does look like there will be some great challenges that we will have to undertake in the game if we so choose.

While this is all still a work in progress for Friday The 13th: The Game, we have our first teaser of the tutorial for this mode and it looks like it could be along the lines of the recent Hitman game. There is not much to go on here outside of getting to play as Jason as he takes down two counselors that have a bit more dialog and action scenes than before. We will get all of the abilities Jason has when stalking in matches, but what makes it sound like Hitman is the fact that there will be other challenges besides just kill the characters. If I had to guess, I think the scenes and characters will move along paths and take actions to set up for some great kills. Have a look at what we have though and see if that lines up with your thoughts.

We are happy to show this First Look at Single Player Challenges coming to Friday The 13th: The Game at no additional cost.

Sadly, there is not a release date or schedule for when all of these will hit Friday The 13th: The Game, but it is known that they will be a FREE update for those who own the game or purchase it in the future. In the end, it will make the game even more accessible for those who are not huge fans of online play or just hunting down random bots who are pretending to be online players. I just hope that it is all fleshed out as well as it looks like it could be and bring in more players to Friday The 13th as it gets even better over the course of its updates and progression.

Have you been waiting for Friday The 13th: The Game to get gameplay like this or are you a multiplayer only kind of player? Do you agree that it looks a lot like the gameplay for Hitman just with Jason and the 80's horror film theme or will it be something completely different? Will this bring you back into the game or purchase it for the first time? Let everyone know down in the comments and then feel free to discuss. As Friday The 13th: The Game is updated, we will update you here on the site. Just be sure to keep checking back in so you can stay as up to date as possible.