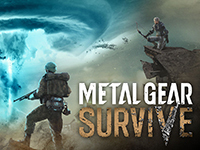 You will soon have another chance to give Metal Gear Survive a whirl before it launches on February 20th and this time on the PS4, Xbox One, and PC. It looks like Konami is bringing us all yet another "beta test" of the game shortly before launch. I put the quotes there as it is most likely going to be more of an early demo of Metal Gear Survive and not a true beta test. I mean, this is all supposed to happen a few days before launch and at that point, there is not much more than can be fixed. Unless this is some kind of massive stress test for the servers than any real beta of the game. It is free and does not require much besides the time to download the program and then play it, so I guess we cannot harsh on it too much.

All of that said, between February 16th and the 18th those interested in checking out Metal Gear Survive for the first time or again can log in and partake in the fun. There will be three missions and two maps to play them in as well as a few different options to play multiplayer. Again, this sounds more like a stress test than a beta. It is a way to see if you actually want to drop the cash for Metal Gear Survive though so I guess that can be the real bonus. That is unless you are a diehard fan and need to have few little extras for when you start playing the game on the 20th.

Those who do partake in this Metal Gear Survive "beta" will be treated with a few little extras for their time and to make their full version stand out slightly. Just for taking part in this "beta" you will score two accessories and a nameplate to add to your inventory. More or less, they are cosmetic things for Metal Gear Survive but they will show all of those who did not hop on to give the game a try that you actually did. Maybe there is some other bonus to the items besides that, but that is what we have here for now. You can see them all just below along with all of the specifics of this "beta test."

Metal Gear Survive Beta will be available for 3 days from February 16th to 18th, 2018 on PlayStation 4, Xbox One, and Steam.

The beta will include 3 missions across 2 maps in CO-OP mode. CO-OP can be played with up to four players online. During the beta, we will also offer special daily missions. Upon finishing creating your character, participants in Metal Gear Survive Beta will receive an in-game bonus in the full game. Don't miss this last opportunity to play Metal Gear Survive early!

Players who downloaded and still have the 1st beta on their PS4 or Xbox One do not need to redownload the beta, but these players will automatically download a patch before playing. Do you agree that this sounds more like a server stress test for Metal Gear Survive than an actual beta test? Are you tired of companies like Konami trying to pass of beta tests as more than just a small demo to entice us more? Do you think these bonuses will all be cosmetic changes or could they have a few hidden things mixed in besides that? Let us know by giving your feedback down in the comments and then discuss. If we do get more for Metal Gear Survive, we will have it here on the site for you. Just keep your eyes glue to the site to see those updates and more.