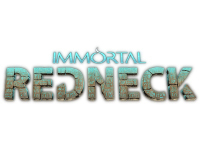 Well, yee haw! If you have been hoping for a mashup of Ancient Egypt mixed with a good old redneck kind of video game to hit the consoles then you are in luck as it looks like Immortal Redneck is on its way to the PS4, Xbox One, and Switch. That's right. It only took a bit of time but CremaGames is finally getting the game over on those platforms here and ready for everyone to experience this odd little rogue-lite however they may wish. Immortal Redneck has been out on the PC since April 25th of 2017, but now on February 27th even more gamers out there will get a chance. Well, except the Switch-only gamers, as they will need to wait until sometime in Q1 of this year to see the game make its way over there. It is coming though.

If you missed out on Immortal Redneck before, it is a first-person shooter with rogue-lite elements mixed in for fun. We play a mummified redneck who has awakened from a dune buggy accident and is out to find out why he is mummified and why there is an army of monsters out there in the Pyramids. It sounds absurd for sure, but so did Redneck Rampage and that was a nice little gem from so long ago. Immortal Redneck is still a nice little gem out there as it is still getting pushed out there for more gamers to try and, hopefully, enjoy. Have a look at the announcement trailer for the console version of the game just below and then get ready to get your redneck on.

With more than 50 weapons to find, ranging from traditional to futuristic and fantastical, no run plays quite like the next. Each attempt is further shaken up by over 100 Scroll Modifiers that enemies drop that can help or harm in various degrees. Players might find a Metamorphosis Scroll with a chance to turn opponents into chickens, or the Sorry, Not Sorry scroll that swaps out all weapons for random new ones.

Each of the nine favors from the gods provides the Redneck with different starting weapons and abilities. Seth, the God of Storms, begins with a Taser Sword, Tesla Coil, and Electric Flamethrower, which allow him to throw electric balls as his active ability. Neith, the Goddess of Hunting, can send a falcon to attack her enemies while also using a Sniper Rifle and Tranquilizer Gun. It doesn’t hurt to have a god on your side when mummies need a beating.

Did you get a chance to play Immortal Redneck back when it first launched or is this the first you are hearing of the game? Do you think that the mash-up like this is a great and fun thing or just a gimmick to sell you more of the game? Will you be holding out until it hits the Switch in the coming months or just be skipping it altogether? Give us your thoughts down in the comments and then feel free to discuss. If we get more on Immortal Redneck, we will have it here on the site. Keep checking back in to keep as up to date on all of it as you can.

Anon Commenter [ Tuesday, 30th of January 2018 - 04:57 AM ]
I bought this game BECAUSE of the redneck theme! We need more like it!
Go ahead and login or register