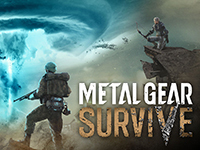 February 20th is not too far off and we still have a whole lot of pushing that needs to be done for Metal Gear Survive. We have seen some things so far and have been given some kind of idea where Konami is taking the game and possibly the franchise, but there has to be more to the game than just collect, kill, and build. Sure, there is a single-player mode in Metal Gear Survive so there will be some sort of story to play out, but that has not been fully detailed out as of yet. At least to any point where we know what is going on and not just having spoilers all over the place. Not that we would want any of those before so we would not be able to fully enjoy the game.

All of that is still true, but we do have a new Fact Sheet out here for Metal Gear Survive and it has a few new things hidden in there that we may or may not have known thus far. We all knew this would be sometime after Ground Zeroes and it looks like we are playing a soldier who survived and was in a coma for six months. He is then forced to go into the wormholes to save others as he is already infected with whatever is plaguing the game's world. It only took them half a year to try so there should be someone still alive over there? That seems like a poor thought process, but it is what it is here. Things still do not make 100% sense here for Metal Gear Survive but maybe it will all work out.

There is still no real word on why the organization cannot just teleport things and require all of the scavenging and crafting in Metal Gear Survive, but maybe that will get shoehorned in somehow in the main story as well as the reason as to why they are still waiting six months later. Of course, that is nitpicking all of the story details and not the gameplay of Metal Gear Survive so we can possibly hand-wave all of that at some point. I guess we will see here in a month when Konami finally brings it all to us.

Following Big Boss’ escape at the end of Metal Gear Solid: Ground Zeroes, a soldier on the collapsing Mother Base is nearly pulled into a wormhole that opens over the base. The soldier loses consciousness and awakes six months later in a facility belonging to Wardenclyffe Section, a secret research organization within the United States government. Players take the role of this soldier with a goal of rescuing those pulled into the wormhole half a year ago and to find a cure for a mysterious infection. “You don’t get to sit this one out. You’re already infected with that lifeform I was telling you about,” a man named Goodluck in Wardenclyffe Section instructs.

What do you think of Metal Gear Survive with these few extra tidbits mixed in now? Do you think it makes more sense for the time to have passed before the protagonist is being sent in or do you think there will have been a lot of other "tests" before then? Why do you think that they will only send in the one guy and limited gear or will there be some kind of reason to force the gameplay? Let us all know down in the comments and then discuss if you wish. As we learn more for Metal Gear Survive, we will place it all here. Keep checking back in to see and read it all.