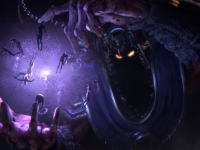 Some big changes are on the way to SMITE as the season five map and updates roll out for the game. At least as it all comes to the Conquest Mode all based on the announcement that came from Hi-Rez Studios out of this year's HRX. All of which will be hitting the PC, Mac, PS4, and Xbox One versions of the game on January 17th. At least if you are looking to give it a solid try on SMITE's public test servers before it goes completely live in the final build of it all. If you are a fan of the game you should know how it all goes for now and just know that it is coming here soon.

The changes that have been mentioned for SMITE include the Conquest Map receiveing a redesign to make the map a bit more fair no matter on where you start play. It will be a bit more symmetrical so there will be no clear advantage based on where you spawn in. The update will also bring back Jungle Fog and some of the monster will be getting "new lore-inspired makeovers" in the mix of it all. More or less, they are evolving SMITE to fit story that the team is also trying to tell in the mix of all of the gameplay we are enjoying so far. This should all build off that and keep it flowing further into the future.

SMITE’s Season 5 begins with the biggest art and gameplay change ever. The Season 5 Conquest Map features upgraded art and new, highly requested gameplay changes to the premier 5v5 game mode. Players will be able to jump in and try the new map for themselves on January 17th on SMITE’s public test server.

In addition to these changes, the ninety-third character to join SMITE has also been revealed and it will be none other than the guardian of the Underworld: Cerberus. The three-headed dog of Hades will also be playable now when the update goes live and you can see him in action just a little bit below. In addition to his announcement, it was also revealed that SMITE will be getting a few other pantheons mixed in during 2018. If you were looking to get more into the Slavic and Voodoo deities, then you will be glad to hear that those are the next planned character to join in the fun. No date on their release has been given yet.

Along with the updated map, Hi-Rez Studios revealed their 93rd playable character, Cerberus, the three-headed guardian of the underworld. Later this year, they will introduce gods from two new pantheons, Slavic and Voodoo.

The last item that has been announced for SMITE here is a bit more on the "lore-inspired" information that was brought up before. While it does not get much detail here, it looks like the changes that are coming are linked into the Lord of the Dead, Hades, and his plans for the game's world. You can get a bit of a tease below, but it looks like he is up to something and is part of the reason all of the changes and alterations are coming. It also makes a bit more sense than the other pantheons are coming too as Death does seem to revolve around many of them and that looks like what we are about to get here in SMITE.

Do you think that these changes to SMITE will vastly improve the game or will it make many players look to leave as it changes what they know? How do you think Cerberus will handle in matches and do you think he will play a bigger role in all of the lore than just being another character to play? Which of the Voodoo and Slavic deities are you looking for in the future updates and do you think they will all make it in? Leave all of your thoughts and ideas down in the comments and then discuss. For more on SMITE and all of its updates, be sure to stick around on the site as we will keep bringing them as we get them.