Mutant Football League Is Coming To Consoles So Get Your Chainsaws Going
by David 'Hades' Becker [ Tuesday, 2nd of January 2018 - 10:00 PM ] 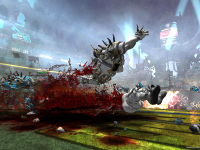 It has been a good long while since our consoles have seen Mutant Football and now, after 25 years or so, Mutant Football League is making it back and landing on the PS4 and Xbox One. This would be the same title that Digital Dreams has out there on the PC back in October, but now it is all ready to come to the consoles again and bring all of the high-impact fun there. It was a promise we heard and now it is coming to fruition on January 19th. So, get ready to dive back into the mayhem with Mutant Football League real soon. I know I am ecstatic over all of that again.

On top of all of that, as if the release for the console version was not enough, it looks like we will also be seeing a retail version of Mutant Football League this Summer as well as some planned DLC and updates come this February and March. There is no solid date on that as of yet, but it looks to include a new multi-season dynasty mode where we can take over one of the eighteen teams and build them up as we wish. Also, it looks like there will be a customizable playoff and a feature that will give us "Dirty Tricks" after winning over a CPU controlled team. All for the low price of FREE at that. The best kind of update and downloadable bits.

Here is a look at Mutant Football League so far on the PC version to get all of you console players out there ready to dive into the fun. I will see you all out there when the time finally comes.

Fantastical arenas full of ruthless fans and deadly traps set the stage for mayhem in every contest that allows players to win by highest score or by killing and eradicating their opponents - a feat made easier as teams use their unique “Dirty Tricks” such as “Bribe the Ref” to overturn a call or having a player become “Ginormous” to grow in size and pummel the puny combatants in their path. Whenever a game begins you’ll quickly discover the only predictable element is broken bones.

Mutant Football League is the bloody-fun next generation, spiritual successor to the retro classic, “Mutant League Football”, designed and produced by Michael Mendheim, the creator of the original game which means you can expect deep strategy game-play, bone-crunching, tooth-shattering hits, and a roster of ghouls delivering tongue-through-cheek humor. Oh, and blood. Lots of blood.

Are you glad the wait is over for Mutant Football League to come to the console or was it a title that fell off of your list due to the short break? Will you be holding off on the retail version of the game this Summer or will you be diving in with a digital version? How do you think all of these updates will affect the longevity of the game or will it be another wait that players will not be willing to do? Let us and the world know down in the comments and then discuss. We will keep an eye on Mutant Football League and bring you all of the updates as they come. Just stick around on the site if you want to get them.