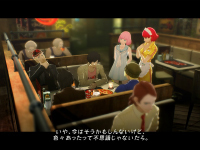 A plethora of new details for Catherine: Full Body have been released and we get a look at the recently added third ‘Catherine’ to the game named Rin

Now that we have heard that Catherine: Full Body is coming to the west for the PS4 and PS Vita sometime in late in 2018, all we can do is sit around and wait for any kind of update for the game to see what else Atlus and Studio Zero are going to cram into the game. We know that this is going to be a remaster of sorts from the original version, but we also caught wind that there was going to be a third person in the mix to throw Vincent off. A character by the name of Rin and everything was left at that. There was a lot of speculation as to what else would be coming to this version of Catherine as it was stated that there were going to be more than just visual updates. Things like new endings and animations to be played out. All of which makes sense given the addition of another into the love square that we have going on now.

It looks like we did not need to wait too long to get these answers for Catherine: Full Body though, as we now have a few little extra bits of information to dig through and look at. Specifically when it comes to Rin. While there is nothing on the specifics of how she will interact in the grand scheme, we do have a nice new info block for here to give us an idea of her character. More or less, she is a piano-playing "hot girl" who does not realize that she is a "hot girl." The lack of common sense also indicates that she will be very "ditzy" and rely on Vincent more than the others in the mix. It looks like we may have a new clingy girlfriend here with Rin now.

Moving along from there, Atlus has also heard the fans of the original game and addressed its level of difficulty for those who could not get through the whole game but truly wanted to. This version will have slightly easier puzzles to solve or other aspects compared the old ones that will make them easier for those who are not as skilled but what to go through the whole story. That does not mean that they have removed the difficulty for those hardcore fans who loved the hard puzzles. It will just be a feature to turn on in Catherine: Full Body so you can play all the old ones and new ones just as you would have expected from before. It is a nice little feature for those who do not have hours to waste on the puzzles but want a good story.

A pianist recently hired by the bar Stray Sheep. She has an extremely straightforward and gentle personality. The occasional glimpse of her behavior gives off the impression she is considerably lacking in common sense.

Other than her moniker, “Rin,” her age and real name are unknown, and her beautiful face and mysteriousness attracts the attention of those around her. (Rin, however, is unaware of this herself.)

She supports Vincent, who is taunted by his nightmares, and becomes a healing presence that exemplifies new values. In Catherine: Full Body, functionality related to improving playability has been drastically enhanced to allow anyone to play Catherine until the end. Through groundbreaking systems unheard of in a puzzle action game, anyone will be able to enjoy the game from start to finish.

For players who want to enjoy and master even deeper puzzle action, Catherine: Full Body also offers a new mode with bold arrangements in addition to the “Original Mode,” which includes the same puzzle stages from the original version of Catherine.

There are also a lot of new screenshots for Catherine: Full Body in the above linked update. They show off some of the new characters in the mix and go into a little more detail on how the gameplay has been altered for players who want the story without breaking a controller. As you should have expected, some of the images may not be suitable for work or home environments, but you can be the judge if you want to take a look at them all.

What are your thoughts on Rin now that we have a bit more for here for Catherine: Full Body? Do you think she will be even clingier than the others or will it just be a ploy to string us all along in the game for something truly sinister? Will you be playing in classic mode or will you be looking to take advantage of the easier puzzles to get more out of the story? Give us all of those thoughts down in the comments and then discuss. For more on Catherine: Full Body, keep coming back to the site here. We will keep all of those updates coming as best we can.