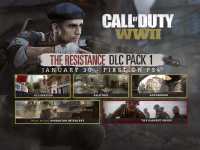 A preview for Call Of Duty: WWII's first DLC pack is here as we get to see the new and classic maps coming to the latest Call Of Duty title in January

It is that time of year again. That time of year where we start to wait for the DLC to roll out for Call Of Duty: WWII and in doing so we get to have small looks at it all before it hits the PS4, Xbox One, and PC in the coming months. January 30th for those PS4 owners as there is the timed-exclusive thing Activision has set up for it all, but we will all be playing this new DLC from Sledgehammer Games by the end of February. That is how things are going to be going for this Call Of Duty so we might as well just accept it all. You have to love timed-exclusives… said no one but the people who make money off of it all.

Anyways, here we get a nice little look at the three new multiplayer maps coming to Call Of Duty: WWII's multiplayer, a new War Mode, and the next chapter in the Nazi Zombie mode. As the title of the DLC alludes to, all of these maps will have something to do with the real-world resistance fighters that were doing their thing during WWII and the locations that they were in. Not that many of you gamers out there will take note of all of that, but the following video will give you an idea on the locations each of the maps will be based on from the real war. If only we would get small story missions for these maps too, then we could look at this Call Of Duty with a bit more historical accuracy instead of just another place to shoot things.

It also looks like Sledgehammer Games is bringing its most terrifying part of Nazi Zombies here as well. At least as they tell it and the name suggests as it is called The Darkest Shore. More or less, it is a Nazi Zombies map that will use more fog than we have seen in Call Of Duty: WWII to date and will allow for more of those zombies to get the drop on you. Especially since there is a new on that can use tactics of sorts. I am not sure how that will work, but it is a thing and you can get a taste for all of that right now. At least in the video form we have just below.

Get a first look at each of the new MP maps, including Valkyrie, Anthropoid, and Occupation, as well as the new War Mode experience and the next chapter of Nazi Zombies, The Darkest Shore.

Are you ready to join the resistance in Call Of Duty: WWII again or will you be waiting a bit longer for all of this? Do you also agree that we should see some story portions of the game for each of these maps or will anyone really notice besides what they can use for cover? Do you think that this Nazi Zombies chapter will bring more of the terror or will we all just spray and pray our way through it all again? Let us all know your thoughts on this and more down in the comments. As we get more for Call Of Duty: WWII, we will have it here on the site. Stay tuned to make sure you get the update on all of it as we move into the new year.