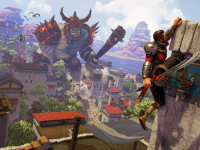 It has been a good while since we saw anything for Extinction and now seems like as good of a time as any to check back in and see just where Iron Galaxy is with the game. I know they have been working hard on it and were making this already impressive title look and feel even more so for when it lands next Spring for the PS4, Xbox One, and PC. We have had a bit of the gameplay so far for Extinction, or at least what Maximum Games wanted out there, and this gave us a nice look at some of the core gameplay and armors that the Ravenii will be wearing to make things a bit harder for us to just kill them quickly. Remember, that is the goal here for the game so we can save everyone from that horrible ending by alien trolls and such. Yes, they are an alien race now according to the video here.

One of the bigger aspects of Extinction that is touched on here is the different types of armor that the giants will be wearing. Just back at E3 we saw about three that would range the encounter from Easy to Medium to Hard. Either things were not ready to back then or the team decided to add in some more flare as we have seven different types of armor we will have to deal with here and some not just in how hard they will be to knock off. Some will make it impossible to climb on, others will deal damage, others will take special kinds of attacks to remove, and some will just be unbreakable. All of which to make it harder to get in there and just start slicing limbs right off. That is how you make it easier to get to the head to put the beast down once and for all.

You can see all of these in the following video or in a nice shorter way with the infographic we have here. That and it shows the true scale of the protagonist to the Ravenii in Extinction so we can better understand the scale of things. Nice.

Choices matter in Extinction. It’s up to our hero, Avil, to use his powers to transport civilians to safety while also slaying his foes and completing other necessary objectives. Ground and air minions–known as Jackals and Vultures–each has to be dealt with in their own ways, but it’s the armored Ravenii that require extra-special attention. One wrong move could mean death for the townspeople or destruction for the cities.

As seen in the Skills & Strategy video, there are a number of upgrades obtained through the game’s skill tree that will aid Avil tremendously, giving him an advantage over the many elite Ravenii he will battle. Some of these include the Rune Slowdown and Air Recovery abilities. One of the most important skills in the game, Rune Slowdown allows Avil to essentially freeze time, buying a few precious seconds to focus on a particularly difficult task. Air Recovery allows you to regain control when you fall or are knocked down, which will help you stay atop an ogre long enough to plan your next maneuver. This makes it a valuable skill to employ once you’ve successfully made contact with a Ravenii’s body.

Players will be able to cut down even the most well-armored opponent using these meaningful, skill-based combat tips. Learn more in the new trailer from Iron Galaxy, and look for the game in stores next year. In addition to all of the armors and such, we also had a nice look at the skills that we will get to employ in Extinction. More or less they are there to help counter the various protections that the Ravenii have on them. For those that hinder climbing, there is a grappling hook style ability, for those armors that can only be removed by snuffing flames there is a time-slowing ability to get them to swing wild. Of course, there is also the base power that lets you hit hard and break the mechanisms that hold it all together. Just so you can get to their head and remove it from the body. I am sure the video will do a better attempt to explain it all than just my words. So if you have not watched it yet, have a look and get ready for Extinction in the coming Spring.

Are you glad to see all the different armors we will have to deal with in Extinction here? Do you think that these were always in there from the start and just were released or was this a design call to make the game a bit more challenging? Will all of this be enough to keep the game from feeling repetitive or will it just be the same monster with the same skills over and over again? Let us have those opinions and more down in the comments. We will keep bringing you all that we can for Extinction as we get closer to the release. Be sure to keep checking back in here to see and experience it all.