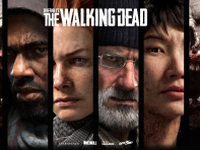 It has been quite some time that we had any updates for Overkill’s The Walking Dead title that we heard about back in 2015. It is still in the works and Starbreeze with 505 Games is still bringing it to us on the PS4, Xbox One, and PC. All of that and Overkill is still working hard on it and is finally ready to show off more of their take on The Walking Dead universe. All in a cinematic way, but given that the game is now slated for Fall of 2018, we still have some time to get all of those extra details and bit of gameplay to get us all excited for this game. Even if your interest in the TV show or comic is starting to flounder, there is still a chance that this will bring you right back in.

The wait may still be a bit, but today we have a new trailer to look at for Overkill’s The Walking Dead title here. At least a cinematic trailer to introduce us to one of the four characters we will get to play in the four-player co-op title we are getting. Aiden is his name and he looks to be a businessman turned "mace" swinging zombie killer extraordinaire. At least based on this trailer. Seeing as each of the four characters will come along with their own specific abilities, skills, and role to play it is an easy leap of logic to think this. Have a look and get to know Aidan here for the game as we continue to wait.

Let us introduce Aidan, the first playable character from Overkill’s The Walking Dead — the upcoming game from Overkill and Starbreeze Studios.

Before now, Overkill’s The Walking Dead did not seem to have a core gameplay mechanic spelled out but now it looks like it could be a Left 4 Dead kind of title in this universe. All in Washington D.C. from the looks of it all so it could also tie in some of the show and comics, but I am hoping that it will stay separate. It could go either way as Robert Kirkman has been very vocal on the game in general and, if memory serves, has helped collaborate with Overkill a bit more than just signing deals. I guess we will see and get ready for more of The Walking Dead to be coming at us next year. As long as it all lasts that long.

What do you think about these new updates for Overkill’s The Walking Dead? Do you think that Aidan here will play the role I spoke of above or will he be different in the actual game and not just the cinematic trailer? Do you like the sound of the L4D gameplay or do you hope it will play out differently to bring us all a truly "new" title? Spill your brains out down in the comments and then feel free to discuss. We will obviously have more for Overkill’s The Walking Dead in short order and we will obviously have it here on the site. Keep checking back in to make sure you stay as up to date as possible.