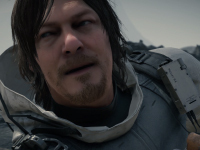 Just as we have had for the last few outings of The Game Awards, we have another new trailer for Death Stranding to look at here and try to figure out. Things have been very strange and hush since Kojima Productions announced the game so long ago and with each new view, this PS4 title seems to baffle and confuse. At least the trailers do as they make little to no sense, but given who is making Death Stranding I guess it works. Just think back to all of those MGSV trailers and tell me how those made sense when out of context for the core game. They did not and that is what I feel will be the case here with this new title.

This trailer takes us back to the role Norman Reedus is playing in Death Stranding. This time clothed and on an outing to save himself and a few others that are part of his group. At least that is what it all looks like from the trailer. Even when one of the presumed leaders starts to stab himself in the stomach after being captured. I am guessing that the "big bads" of Death Stranding will put you to a fate worse than death in the game's world or they drive you made upon touch. It is hard to tell, but that is what looks to be going on here. Have a look at the most recent trailer and see if you can make heads or tails of it all.

While the trailer still baffles us with clues as to what is going on in Death Stranding, we did get a nice little hint to something. Well, more just a bit of information that we can take as Kojima Productions' head let loose the name of the character we see here. Norman Reedus is playing someone by the name of Sam. Not the biggest thing, but it is something. Although it has been said that there are clues and connection between all of the Death Stranding videos so far and we need to dig in to find them. Or just sit back and wait while gamers with more time on their hands come up with their answers. Either way, there is something deeper no one has seen yet for the game.

This is the necklace replica that Sam (the player) (Norman) is wearing in DEATH STRANDING. For now there’s only 20 of this in the world including Norman. It weighs light as it made with titanium. pic.twitter.com/ZtPF9m2u0A

What are your thoughts on this new trailer for Death Stranding that we have here? Do you think that it shows off more than we could have expected for the game or is it another bit that will only make sense in the full game when we reach it? Do you think that the name and necklaces hold keys to anything or will it all be a misdirection as the developer is known to do? Let us have all of those theories and collaborative thoughts down in the comments. With each new bit for Death Stranding we get, you know we will place it up here. Keep checking back in to see and hear it all. Also to see if there are any further explanations that can be dug up.