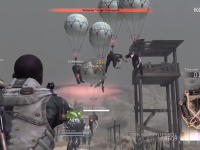 More gameplay for Metal Gear Survive is here for a few more minor spurts to take in. All in the same Vlog style that Konami has been quietly pushing out there for those who are interested in the game still. One would think that with February 20th not far off that they would push things a bit hard to get some sales on the PS4 and Xbox One for Metal Gear Survive, but maybe this low-key marketing is working for them. It is no big surprise that there are a lot of gamers out there who have some serious doubts for the game since it was announced, so one would think we would be seeing some amazing gameplay for it all here or something to entice.

Whatever the case may be, we do have some smaller clips for Metal Gear Survive here to show off a few more aspects of the gameplay. I would say a few different looks at the gameplay here as it still boils down to some weird AI that cannot or will not walk an extra five feet to get around a barrier, but I guess these "zombies" will do what zombies do in the end. If you want to call them that still. They do look to be more like the "controlled" creatures from the end of Metal Gear Solid V more than zombies; at least to me.

This is the introduction to the "intercept unit". These units can be set to trap and attack incoming enemies and can be used effectively when combined with a defence unit.

Fans of The Phanton Pain will recognise the Walker Gear in action here. Use it wisely to mow down enemy hordes.

Just in case you thought Konami was deviating even further from the known of the Metal Gear world in the game, it does look like there will be a familar-ish way that rewards we be doled out at the end of the matches. Air support of some sort will drop in cardboard boxes for those who survive the match so they can open them all up and gain a few little extras. It looks like they drop for everyone out there and not just you when the waves of enemies are handled, but it could also just be for the group to share and everyone to open up. We are truly going to need some more context here for Metal Gear Survive to sell players on it all.

What do you think about Metal Gear Survive now with these few new little clips? Do you find it odd that they are treating the MGSV Walker Gear as an Easter Egg here given that the game looks to be just a modified version of that game? Does any of this make you want to play and own the game more or are you still looking for that "wow" video or clip to do that? Let us have those thoughts down in the comments and then discuss. We will keep digging up all of those smaller bits for Metal Gear Survive and bring them to you here. Keep checking in to make sure you get to see them all and just how the game progresses.