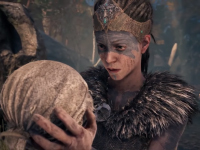 In the first three months Hellblade: Senua’s Sacrifice has outperformed than the team expected and Hellblade shows little sign of stopping

Word has officially broken that Hellblade: Senua’s Sacrifice has crossed the five-hundred thousand sold mark and is well into making a solid profit for Ninja Theory's small team. This is not news that we normally cover here on the site, but this is kind of a bigger deal for gaming in general and not just the coffers of this one developer. It is a sign that even a small team of about twenty can make a title that can meet and then exceed expectations in a short amount of time and not require a whole lot of "fluff" to do so. Not only that, but it shows that games like Hellblade can be made and take a lot of risks, but still have a huge payoff. Like a thirteen million dollar payoff in three months. A third of the time that the team originally thought it would take.

Before you start to scoff at these numbers when compared to some of the larger teams and publishers out there, it is totally worth a note that Hellblade: Senua’s Sacrifice was also placed out there with a much smaller budget and a reduced cost to pick up; it was only half the cost of a full AAA title but still held all of the substance. The team may state that it was half the size, but how many other larger AAA titles out there can still give you a solid seven to eight hours of single-player fun and an amazing story on top of it? The answer is not many thus adding more importance to all of this. It shows it can be done and that even with Hellblade's path in development and topics, it can still reach a massive audience and push the industry forward.

Here is the most recent developer diary for Hellblade: Senua’s Sacrifice, and the final one, that goes a bit more into detail on all of this. Not only on the financial side of it all, but also on the fact of how the game has impacted players outside of just entertaining. One of the goals of the game was to give a solid showing of what true mental illness could be like and also educate players on it all. It looks like they have also succeeded there.

The final Hellblade: Senua’s Sacrifice Development Diary! Hear how the launch of Hellblade went for the Ninja Theory team and the performance of the game so far.

Now while I will still praise Hellblade: Senua’s Sacrifice and the developers for what they have done, I do hold umbrage with the claims that this style of development can be done by other smaller teams out there. Specifically when it all comes down to the funding for it all and the removal of a publisher from the mix. While I am not a huge fan of needing publishers for the money, it should be seen that almost two-thirds of the funds for Hellblade came from their saved funds from past titles. Not every small studio will have access to do something like that so this is not something that will be easy to replicate and allow for studios to hold their IPs. Good on this one for doing so and I truly hope to see more amazing work from them, but it does not sit well with me on how they make it sound here in the video. Again, this is me being very cynical and not trying to harsh on what was accomplished here.

Are you glad to see Hellblade: Senua’s Sacrifice succeeding as well as it has or did you think it was going to crash and burn along the way? Do you think this is a great sign for many other smaller studios or do you agree that they kind of lucked out based on how their funding actually dropped here? Have you played the full game and now have a better understanding for those who suffer from similar ailments as the game was designed to do? Let us have all of those thoughts and feelings down in the comments and then feel free to discuss. If there is more on Hellblade: Senua’s Sacrifice, you know we will have it here. Keep checking back in on the site to see it all.