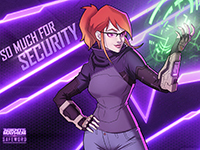 If you are still jamming out to Agents Of Mayhem and still having a blast with it, then you should know that a new bit of DLC just quietly dropped out there that you may want to take notice of. Why Deep Silver and Volition did not make a big deal about it is beyond me, but another character from the Saints Row world is now available for the game. Who? Well, now Kinzie Kensington is joining the front lines for Agents Of Mayhem and getting off the desk. All available as you are reading this and for the PS4, Xbox One, and PC version of the game. So, head on out and pick it all up if you want one more agent on your teams.

While there has yet to be official gameplay for the character in Agents Of Mayhem, I am sure players out there will get that up with the quickness, we do get to see a bit of her story on how she was recruited. I am going to venture a guess that this will be her in-game intro as well when you head out to add her in and do her side-missions, but here is a nice little taste for now. Have a look and see if she is the right fit for your play style or if you at least think she will be.

If you can build it, she can hack it. Kinzie Kensington joins the Agents Of Mayhem, download the Agent Safeword DLC today.

Agents of Mayhem is available now on PS4, Xbox One, and PC.

Currently Kinzie is available for Agents Of Mayhem in the Safeword Agent Pack for $4.99 USD. This not only adds the character to your roster, but also scores you four more agent skins, five more weapon skins, one Gremlin tech, one vehicle skin, one unlock mission, and one personal mission. All of which I am going to venture goes for Kinzie in the long run, but the skins could be for other agents. Doubtful, but completely possible if Volition wanted her to get mixed in properly with the team and thus color coordinate. I guess we will all see here soon as the videos start to flood the internet.

Are you glad to see Kinzie Kensington added to the list for Agents Of Mayhem or should she have been in there from the start? Do you find it odd that the release of this new character went so quiet given how Deep Silver normally rolls or are they too busy with other things to focus on this more? Would you want the skins and everything to be for all of the characters or do you want them to only be for Kenzie instead? Let us all know down in the comments and then feel free to discuss. We will keep an eye on Agents Of Mayhem to make sure you keep getting all of the updates, so keep an eye on the site here. You will not want to miss out on any of the updates.