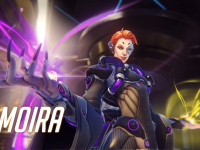 If you were not paying attention out at Blizzcon here recently then you may have missed a few new things that are heading to Overwatch here soon. A few things like a new map and another new hero for the game are now coming out there from Blizzard and trying to add even more into the mix of things. That is right, we have a new character heading to Overwatch and it is high time to meet Moira and all of her "unethical" ways. At least some will see them as unethical as she is definitely not on the side of good and righteousness here. All based on her story and some of how she does just exactly what she does.

Moira will be filling in another Support slot in Overwatch and will be bringing some interesting damage output along with the ability to keep her allies alive just a bit longer. She will have something called Biotic Grasp that will heal allies in front of her with her left hand and sap health from foes with her right hand. All to make her last just a bit longer. She will also be hurling around Biotic Orbs that will bounce around the maps of Overwatch slowly draining enemies that come too close. Mix that in with her Fade ability that lets her teleport short distances and her Coalescence ability that allows her to damage enemies and heal allies in a beam, and she will be a force to reckon with here.

Meet Moira—a Talon geneticist as brilliant as she is ambitious.

As I mentioned above, there was also a new map for Overwatch teased out at Blizzcon and it looks to bring all of the fun from Blizzard's past right into the full on fight for the game. You can see the teaser below, but it looks like a full amusement park style map that will have aspects of the developer's past titles made into "ride" that I assume will be set pieces as well as functional to make the matches just a bit more interesting. Sadly, there has yet to be a set date for this map or Moira so your guess is as good as mine as to when we will see it all grace Overwatch. At least in the live game side as everything should be available right now on the PTR side.

See your favorite gaming memories come to life in Overwatch’s new hybrid map as you attack and defend the payload across Azeroth, Tristram, the Koprulu Sector, and beyond!

What are your thoughts on Moira here for Overwatch? Do you think she has a solid power and skill set or do you think things should have been crafted a different way? Are you excited to see what Blizzard World has for us in the game or do you think it will be just another map that we will get lost in due to all of the nostalgia? Let us all know what is on your mind down in the comments and then discuss. For more on Overwatch, be sure to keep your browser set here. We will have it all as it comes and you will not want to miss it.