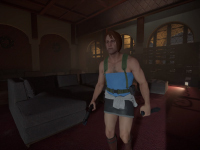 We still may need to wait until December 5th to get to play Dead Rising 4's new mode, Capcom Heroes, but that does not mean we have to wait to see the final set of costumes we will get to dress Frank West up in beforehand. It looks like Capcom could not wait to give them to us either as here we go with the final six so we can round out the roster to seventeen now. That really is not all that round of a number there, but that is how many different costumes we will be getting with this free DLC when Dead Rising 4 gets updates and/or Frank's Big Package finally hits stores. Depending on which platform you have the game on already or will be getting it for.

What are these new costumes coming for Dead Rising 4? Well, in a nutshell, they are Arthur, Jill Valentine, Morrigan, Viewtiful Joe, Amaterasu, and Bass. All from beloved franchises in the publisher's wheelhouse and some of them being firsts to even show up in the Dead Rising franchise. I am talking in minor ways and costumes from before here and not as playable characters. Not that they will completely be a playable character in this new mode, but some of their more iconic moves and attacks will be making the leap over here so that is a thing. Have a look at just what these costumes will be bringing to the game mode and see if there are any more that will get you to join back in on the zombie fun.

Over the past few weeks, we’ve been revealing the upcoming costumes and abilities that Dead Rising’s Frank West will be able to adopt in the upcoming game mode Capcom Heroes coming free to Dead Rising 4 players on December 5th. You’ve seen Frank dressed up as some of Capcom’s most famous characters, wielding their powers and abilities, and today we’re revealing the final heroes that will be coming to Willamette in Capcom Heroes.

I do have to say that I absolutely love the Arthur costume here and just how it alters Frank here as well. That fact that he will be running around with that crazy walk just tickles me pink and is enough to get me excited for this new DLC. I am not discounting any of the others here and I am sure they will bring their own fun to Dead Rising 4, but so far Arthur has been enough to sell me on it all. I guess they were just saving their best for last here and it worked for me. Also having Jill in there is a nice little homage to the whole franchise that also helped put Capcom on the map. I would have gone with Rebecca, but Jill works just as well.

What do you think of these final costumes for Dead Rising 4's new mode here? Do you like the Arthur one as much as I do or was it a different one that has caught your eye for the mode? Was there a character you wish would have made it over from their other titles or do you think the team has hit on the perfect costumes so far? Let us all know and then discuss it all down in the comments. For more on Dead Rising 4 and any of its new modes that are coming, keep checking back here. We will keep all of that information coming to you and you will be glad you did not miss out.