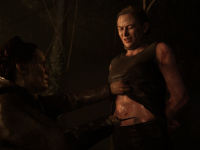 It has been a good while since we had anything of real substance for The Last Of Us Part II and out of Paris Games Week we now have a new trailer for the game. A nice and lofty trailer that shows off a new set of characters that will be part of the overall Ellie and Joel story, but have their own little bit to go through before Naughty Dog gets them all linked and on the same page. Or maybe this is what happens to them after they are linked to their story. It could also be something that happens right in the middle of The Last Of Us Part II and we are not seeing the protagonists for "reasons" at this point. In fact, it is just a good showing of something new for the game that will have a bigger part to play at some point, but the team is being hush-hush on all of it for now.

The main point here is that we have a new look at The Last Of Us Part II and it shows off just how much work the team has done to get the game to look spectacular and fit into the theme that they have been pushing since it was first announced. A brilliant way to do it all as it does not cloud our minds with what is going on for the characters we have learned to love so far and focus on all the little things that could be here and what we should expect. If all of that makes sense outside of my own head. More or less, the visuals and animation for this part of The Last Of Us story is what we should all be looking at as well as the main mindset of the people in the world. No distractions from all of the new stuff that is coming in this chapter of the game.

At its core, The Last Of Us Part II is still very much about Ellie and Joel, but for this reveal, we wanted to showcase several new characters that are integral to their next journey. We’re sure you have many questions after watching this scene.

We’re also pretty sure that we’re going to see all sorts of theories about whom these characters are, where and when this scene takes place, and how all of this fits into Ellie and Joel’s next story. For now we’re keeping mum, but we’re excited to see what y’all make of this piece of the puzzle.

Of course, you do not have to take my word on any of that as we also have a follow-up interview from Naughty Dog on the footage you most likely just viewed above. If you skipped the above video for whatever reason, then at least part here will give you more of an idea of just what the team is bringing here for The Last Of Us Part II without needing to see all of the violence we will need to deal with in the game. It should not come as too much of a shocker that since the world has gone to shit, most of the remaining humans have as well. Now we just get to see them with the same visual quality and performance as we get on our TVs every day. At least that would be my basic take here based on the trailer and interview.

The Last Of Us Part II debuted a brand new trailer at Paris Games Week, and to our surprise it provided more questions than answers. We sat down with Creative Director Neil Druckmann to see if we could pry any more details about exactly who these new characters are and to check in on how development is progressing.

What are your thoughts on this new trailer for The Last Of Us Part II? Do you think that it is too violent for you or is it the fact that we are blending the technology and realism too well that it does not feel like a game scene you are watching? How do you think this little team of characters links into the larger story of the game and will they be on our side or not? Let us know what you are thinking down in the comments and then discuss. Each new bit of information we get for The Last Of Us Part II will be here on the site. Keep checking back in constantly to see and hear it all. Hopefully, we will also have a solid release date for the game in short order as well as it is looking like it could be at a place to set that down.