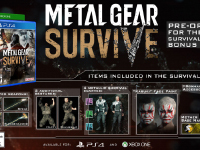 Love the idea or hate it, it looks like we have a release date for Metal Gear Survive now. There have been many gamers out there who were hoping this would just die off since its first announcement and it looks like they are going to be let down, or converted, as Konami has officially set the date for the game to hit the PS4 and Xbox One as February 20th of 2018. At least in the North American regions with Metal Gear Survive hitting the European market on February 22nd. Now you know what days to get ready to give the game a true testing out or to try to call further afoul for all of the drama that unfolded within the last few years with the franchise.

If you are excited or curious about Metal Gear Survive, then take note that it is up for pre-order now as well and will be coming with some extras for you setting aside the cash to pick the game up. A pre-order will net you four gold weapons, two additional gestures, four metallic survival scarves, Kabuki face paint for your in-game character, a Boxman accessory in-game, and a Mother Base nameplate to show off your skill in the game. All pretty cosmetic stuff here and as to be assumed for most pre-orders like Metal Gear Survive. At least for those who are not out to trash on the game from day one and willing to give it a chance. Just in case you ready through all of this and have no clue what Metal Gear Survive, here is some of the early gameplay that cause the stir back in 2016. It shows us how this four-player co-op version of the franchise will pit you and the team against swarms of the undead in locations we played through in Metal Gear Solid V and others. It looks like it could be fun once you get past any hang ups you have over Konami and I know I am going to go with an open mind. It does seem like a deviation from the core of the franchise, but sometimes giving us new things will start a completely new idea and franchise. Sometime not though, so it is good to be a little cautious.

In this world exclusive, Metal Gear Survive takes to the stage for the first time at TGS 2016. Join a squad of four players as they work together on a mission to infiltrate a dilapidated compound and then defend it from the onslaught of relentless creatures. Using co-op stealth, infiltration and defense tactics, and special new equipment and weapons, the squad provides a glimpse of both new and familiar survival gameplay elements that form Metal Gear Survive.

Where do you stand on the whole Metal Gear Survive thing out there? Are you glad to see it has a release date not too far off or will you be skipping over the game entirely due to "reasons?" Do you think that the two styles of gameplay will blend well or will this just be one last move to capitalize on the franchise now that the creator is no longer around? Give us all of those thoughts and then discuss down in the comments. For more on Metal Gear Survive as it flows out there, make sure to keep checking in here. We will keep it all coming and you will not want to miss out on any of those updates.