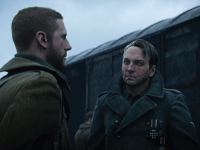 A story trailer for Call Of Duty: WWII is here and shows us all how this addition to the Call Of Duty franchise will take us deeper into some iconic battles

Hold on to your butts as the story trailer for Call Of Duty: WWII is here and it looks like we will be going through another explosive journey in far off lands where we meet new people and then kill them. Or we just have to deal with all the insanity of the Second World War and the parts that Sledgehammer Games has pulled for us. Still not the best of cake walks to have, but it goes a bit further into the "back to Call Of Duty's roots" for this installment. Something that I know Activision is hoping will pay off on November 3rd when the game hits the PS4, Xbox One, and PCs around the world. Even though it does look like a story all from one side of it all and other nations will be seeing another version of just what America brought to the fight.

Yes, in Call Of Duty: WWII we will be taking on the role of another Private from the ranks of the U.S. named Ronald “Red” Daniels. He is in the First Infantry Division and managed to not get his head shot off on D-Day. I am going to guess the player will have a hand in that unless they want to make that all a cut scene. Anyways, the rest of the story continues with Red and his squad fighting through a bunch of the other major battles during WWII in the normal Call Of Duty. At least the original way before we could just press a bumper button and win the day with a swarm of robotic bees or something alike. Now we have to do it with good old explosives and a whole lot of bullets. Bring on the "spray and pray" again.

The following trailer for Call Of Duty: WWII's story highlights a part of what I mentioned here, but it also looks like we will be seeing a little more inside some of the Axis controlled areas. You know, Nazis doing Nazi things and such with us trying to stop it all. I am curious if Sledgehammer Games is going to go full WWII on us here and not have it so we can save everyone and have to witness some of the horrors that did occur. I would even settle for a good mission where we had to recreate one of the famous escapes from the concentration camps where we had to deal with some of the hardships as well as not getting most of the people out alive. It does not sound like a good fit for a Call Of Duty game, but we can hope I guess.

Call Of Duty: WWII tells the story of Private Ronald “Red” Daniels, a young recruit in the U.S. First Infantry Division who experiences combat for the first time on D-Day, one of the largest amphibious assaults in history. After surviving the beaches of Normandy, Red and his squad will fight their way across Europe, engaging the enemy in iconic battle locations such as the Hürtgen Forest and the Battle of the Bulge, as they make their way into Germany. The journey begins on November 3rd.

How do you feel about the story for Call Of Duty: WWII as it all stands as of right now? Do you like where it looks like it will go or will it be another "by the numbers" kind of story for the game? Do you think that Activision would allow the team to do some of the darker stuff from the real history or will they have asked to focus all on the "winning" aspects? Would you want to play a version of the franchise where we were always destined to lose based on the real history or maybe even all from another side of the same conflict? Let everyone know what you are thinking down in the comments and then discuss. We will have a lot more for Call Of Duty: WWII in the coming weeks, so be sure to keep checking in to see and hear it all.