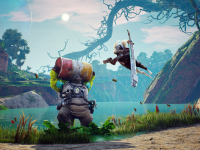 A new title, Biomutant, was announced at Gamescom and it looks like Biomutant will be bringing the best in bionics, mutants, and Kung Fu in 2018

Get ready for another new IP to come to us all as Biomutant has been given the full announcement treatment out at Gamescom here in the way of a cinematic trailer. That does not do too much to show off this title from Experiment 101 in terms of gameplay, but it does show that THQ Nordic is still open to some amazing looking ideas and this is what we have here. Especially since Biomutant is listed as a Kung Fu Fable but it also includes the combination of mutant powers, bionics, and weapons in an open-world action RPG. That is of course the high concept for it all and we can expect more as we wait for it to hit the PS4, Xbox One, and PC sometime in 2018.

Seeing as Biomutant has only been given the announcement treatment, and we know how few and far details can be, there is a little more known for the game. Obviously, from the trailer, it is set in a post-apocalyptic setting. It will also include real-time melee, shooter, and special ability combat. There is also word that it will have very deep character progression and your character will be fully customizable based on what we know from general MMO titles. None were specifically claimed for comparisons, so we can only hope that Biomutant will use some of the more detailed versions and not just something that will change colors or things and still look the same. We should be finding out here at PAX West though as the game will be playable out there.

While information for Biomutant does not go much further than what we have above, it does look like there has also been a Collector's Edition of the game listed out there for those who are truly excited for it all. It looks like it will be coming with a copy of the game's soundtrack, a fabric poster version of the box art, the game, and a figurine of Biomutant's protagonist. It looks like it could be about 6.6 inches in height based on just comparison of the items in the image, but it could be a lot bigger or smaller than that. It is stated to be a figurine, which are generally much smaller than statues, but I guess we will have to wait to find out. If THQ Nordic keeps with the past for the company it should be a decent sized statue though. Biomutant is a post-apocalyptic open-world ARPG that delivers real-time melee, shooter, and mutant ability action. Replayability by varied and deep character progression, exploration of three systematically generated worlds, an underworld and a small solar system, by foot, mech, air-balloon, jetski and UFO. Biomutant also features a fully customizable (MMO style) character and mutation system, bionics and creative item crafting, plus an interactive narrative featuring a contextual storyteller where the players creates their own story of survival in a vibrant colorful world.

What are your thoughts on Biomutant as it all stands right now? Does it look like it will be a new and interesting RPG title or will it be the general post-apocalyptic story that we normally get with these things? Do you think that we will be able to customize more than just colors in the game or will Experiment 101 give us the ability to alter everything down to trinkets and add-on gear? Let us all know what you are thinking down in the comments and then discuss. For more on Biomutant, be sure to keep checking in here. We know there will be a lot more in the coming weeks and months and hopefully you will not want to miss a single thing.