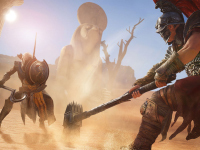 I hope that you were not sold on the previous combat systems as it looks like Assassin’s Creed Origins is going to be changing it all up and give the franchise a good shake as it needed. I mean, we have all seen some of it so far in the other videos and gameplay that Ubisoft has let out there, but now we get some solid words on just what is going on that may or may not turn you off to the new game. One of the bigger aspects being that in Assassin’s Creed Origins we are switching to a hit-box based system instead of the pairing system we once knew. No more will you be able to take enemies on all like ninjas in a bad Kung Fu film as they will pile on and try to overwhelm you in most cases. At least if you are just swinging wild and not minding your surroundings.

I say mostly above too as it looks like we are still getting various enemy types in Assassin’s Creed Origins as we have had in the past titles. The difference here being that some will choose to attack from the shadows in a hit-and-run tactic and others will 'champions' of the group and be allowed to take you on one on one. So I guess the system isn't completely scrapped, it will only be used for specific types of enemies although if you get to close to those enemies cheering that one on, they will jump in and give a swing or two. So much more that we will have to be aware of as we take them all on. Unless you are a master assassin and can go stealth for much more of the game than others do.

Since the system here has been altered, Ubisoft has not left us completely out to dry in Assassin’s Creed Origins when it comes to the combat. There of course will be multiple weapon types we can switch through in the game to fit the specific play-style and setting you are in. In addition, we will be getting a better dodge mechanic that can be used in succession three times before needing to recharge, as well as an adrenaline meter that builds up as the fight carries on. Once that it fully filled up, we can activate Rage Mode (wait a second…) and go crazy on all of the enemies in the area. Sounds an awful lot like another game kind of set in the same era as Assassin’s Creed Origins if you ask me.

In addition to all of the new combat options and weapons we can use, there will also be arena-style combat in Assassin’s Creed Origins. They did need a good way to show off all of the new features of the combat as well as bring more of the historical accuracies to the game. Outside of one of the arenas, as it will be introduced via the story, they are all optional but have some rewards tied to them. More or less they look to function like an enemy wave system in a sometimes shifting setting all while leading up to a unique "boss fight" at the end. Pretty much as we could assume by just mentioning the side-game here but it does look like it can be much more than just a pit where Bayek and other fighters are dropped into and the last one standing emerges. Not to mention that some of them look to be more elaborate and may have animals to fight as well. I see hours getting lost there for me.

With all of that said, what are your thoughts on the new combat for Assassin’s Creed Origins here? Do you think it will help the franchise get back on its feet after the most recent letdowns or will it be something that detracts from the fun players had before? Do you like the addition of the arena battles into the game as a side thing or should they have just been something in the background as we are playing someone who should stay under the radar in the world? Let us all know down in the comments and then feel free to discuss away. As we learn more for Assassin’s Creed Origins, we will of course have it here on the site. It looks like Ubisoft is opening up more for the game here and we should get some great info-dumps out of it all.