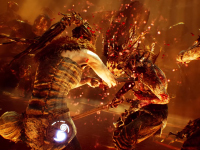 Another trailer for Hellblade: Senua’s Sacrifice has been released this week and goes into more on how Hellblade will be getting some PS Pro features & more

It's always a good week when we get two big updates for Hellblade: Senua’s Sacrifice as earlier in the week we caught wind that there was to be a Photo Mode in the game to capture all of the fun, and now we are back to see just how amazing some of those shots can be with the PS4 Pro features getting added on in and some of the video output specification the game will have for the PC version. If you've been following along since the beginning you'd know that Ninja Theory has been working their asses off to make this a spectacular looking game and now you can rest assured that Hellblade will be coming with the coveted 60fps on the PS4 Pro. On the PC, the cap is only what your system can handle so get ready to put the settings at "Godly" so you can see it all in the best light.

Just in case you don't have the best systems yet to run Hellblade: Senua’s Sacrifice, we also have a new and official trailer for the game to look at running as it will on the PS4 Pro. You can see it below and then just make sure you have the best screen or device to watch the new trailer on so you can get a solid feel for it all. Also, and I can't stress this more, headphones or an amazing sound system so you can get the full effect of the audio too. It is another key point of the game and you'd be doing yourself a disservice to view Hellblade in any other way. Trust me. You'll understand once you do.

Looking back at all of the past trailers for Hellblade and all of the other looks out there, I am still floored by what Ninja Theory has been able to pull off visually here. In fact, if I didn't know better for the scenes with Senua, I'd swear that they used live footage for some of her sequences as well; and I'm not talking the motion capture aspect. Details down to the eyes have been animated so well that I forget I am looking at a digital character and not a real person here. Hopefully we don't need the latest and greatest hardware to see that all in action when we spin up Hellblade: Senua’s Sacrifice, but I have a feeling we just may. Not that I think it will look horrible on lower-end systems or the older PS4 models, but this is most likely a sign of where we are going visually for our games. Also hopefully the same in the audio department as that too is completely spot on.

Do you have any new thoughts on Hellblade: Senua’s Sacrifice after seeing the new trailer above? Will you be able to run the game at its peak performance and be able to see it just as well on your screen? Do you think that the swirling voices and other audio effects will "get to you" just as the team set out or will you be missing something based on your current set up? Let us all know down in the comments and then do discuss away. We are only a little under two weeks out from Hellblade's release on August 8th and we may have more to bring. If we do, be sure to keep checking in here as I know you won't want to miss out on a single bit of update that we may be able to swing.