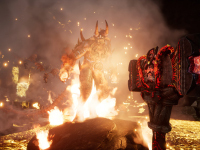 If you've been hoping for a new Open-World RPG in a fantasy setting, then get ready as Citadel: Forged With Fire has just been given the full announcement treatment here and is bringing along just what you were hoping for. In fact, if you are interested in checking it all out early you'll be able to do so on July 26th when it hits Steam Early Access for those PC gamers. Don't worry if you are not though as Blue Isle Studios is also aiming to bring Citadel: Forged With Fire to the PS4 and Xbox One too, but with this announcement we only have the dates for the Early Access to help them craft "the ultimate fantasy sandbox game." Their words and not mine…

“Citadel is a completely new genre for us, our biggest goal with this title is to work closely with our community to build the ultimate fantasy sandbox game that is playable online with friends.” said, Alex Tintor, managing director of Blue Isle Studios. “This project has been a labor of love and we are excited for its launch onto Early Access this summer.”

Citadel: Forged With Fire is still in the early-ish stages of development of course, so not much is being given for it just yet. We do have a nice little trailer here to look at as well as the gameplay features that are going to help sell the idea of the game. For the most part they look like a solid mashing of multiple other features that work in other game. Have a look just below and be the judge for the announcement footage. I won't hold back on you.

Citadel: Forged With Fire players are given complete freedom to determine their own destiny; become an infamous hunter of other wizards, tame mighty beasts, forge alliances with fellow players to create an imposing House of Wizards, or visit uncharted territories to unravel their rich and intriguing history. The path you take is yours to choose.

If I had to describe Citadel: Forged With Fire based on what I saw and read here I would place it in the realm of Harry Potter meets Skyrim. You can't say you didn't see all of the broom flying and not think of Harry Potter as it almost looked like scenes lifted from the films. Although I will say that it does look like the world creation and destruction portions look pretty cool. I am curious how customizable Citadel: Forged With Fire's castles will be and how durable we can make them. Especially if we can hurl towers around like we see here in the trailer. I guess we'll find out here in a little over a week when it is playable to some of the masses.

What are your thoughts on Citadel: Forged With Fire as it all stands right now? Do you agree that it looks like a massing up of a few different franchises and gameplay mechanics that is trying to be sold or will the final build play and look different to you? Do you think that we will be able to make our castles overly durable or will it take just one player throwing buildings around to destroy our homes? Comment and then discuss down below. As we learn more on Citadel: Forged With Fire we will have it all here for you. Keep checking in to make sure you are fully up to date on it all.